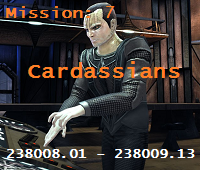 The Victory has been on shore leave at DS 7. While there two officers where attacked. Information was gathered to show that there is a gun smuggling operation going on between parties unknown and the Cardassians.

The Captain has been tasked with escorting a senior Federation ambassador to Cardassia Prime. The Victory will use this as cover to try and intercept the arms smugglers.

The Victory's arrival lead to a battle with Cardassian ships. Lt Hapgood was kidnapped during a skirmish with the Cardassians. The Victory has discovered that he was beamed off the ship while her shields where down. The Victory located and followed the ship believed to hold the Lieutenant. The crew is worked around the clock to bring systems back on line. Tactical reported that there was a ship hidden within an asteroid belt. A shuttle was launched to flush them out.

The Victory finds herself caught in the middle of a civil war. Cardassian ships allied with the provisional government attack those looking to gain their own control. The Victory is nearly destroyed by vessels associated with the Order of the Nightshade before the fourth order shows up. The Victory learns that Federation quantum torpedoes were being transported by a cargo ship.

Following the safe return of the away team, the Victory repaired herself and left the sector. However, Lieutenant Hapgood remained missing. Commander Avatar left the Victory to reunite with the Ilyow and was replaced as first officer by Lieutenant Commander Story.