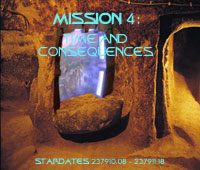 Four weeks prior to the Victory's arrival in the Atlanta system, the USS Thomas Paine while on patrol near the Romulan neutral zone detected unusual power readings near the planet Atlanta V. Unable to mount a full scale science mission, they reported the information to Starfleet. They in turn dispatched the science vessel Bimony. But what the Bimony found on the planet could change pre-human Alpha Quadrant history. The power source detected was a quantum singularity apparently reactivated by the Thomas Paine's patrol. The power source was located deep within the Atlanta V surface. The Bimony had left a specialist team of scientists under the command of a Doctor Eleanor Young at the site. Dr. Young's team found the remains of an advanced civilization that history has no record of. Apparently, it vanished without a trace hundreds of thousands of years ago. None of the text from within the underground ruins matched anything within the Federation database. The Victory has been sent to investigate for two reasons. Firstly, Dr. Young has reported that several members of her team have disappeared without trace. Secondly, long range scans have noted that the Romulans had increased activity along that section of the neutral zone.

Upon establishing orbit of the planet, Captain Hurne ordered two away teams. Commander Avatar would lead the first team to investigate the disappearance of the Bimony science team. Avatar's team would include Lieutenants Story and Joaquin, and Ensigns Colon, Jaxon and Xanyr. The second team would be led by Commander DaSilva. Along with the CSO, Lieutenants Kobar and Morg, and Ensign Jaimeson would investigate the quantum singularity. Scans of the planet revealed the quantum singularity was located somewhere on the southern continent. A precise location could not be determined due to heavy interference. Scans also revealed that a Romulan ship seemed to be patrolling nearby, just across the neutral zone.

Commander Avatar's team beamed down first. They were met by several of the Bimony scientists who seemed to recognize the Commander's name. Their explanation was that they had found his comm badge buried deep in the ruins. It appeared to have been there for a very long time, some 200,000 years. The team was split into two smaller teams. Lt. Story and Ens Colon were ordered to explore the main room of the complex while Cmdr Avatar led the rest to the location of the disappearances.

On the ship, a probe was modified to emulate a Galaxy-class starship and set on course to skirt the neutral zone. It was hoped that this would draw the Romulans away. It was also at this time that Lt. Kora experienced a loss of time, and began an investigation of his own.

Back on the planet, Story and Colon found mysterious paintings and hieroglyphs showing Starfleet personnel aiding the local peoples. And Avatar's group found a bright light at the end of the corridor. Even though Lt. Joaquin received strange feelings from the light and the area was hot with chronoton particles, the team was drawn towards it, and into it. They found themselves taken back over 200,000 years in the past.

Prior to Commander DaSilva's teams' being beamed down, Lt. Morg was called away on personal business and replaced by Ens Redoria on the team. During their initial search of the area they found a group of Talaxians. Strange thing was that they weren't just half a galaxy away from home but scans revealed that they weren't even from this time. Members of the team started to become lost in time as they explored the area. Cmdr DaSilva found himself alone and unable to contact the ship.

As Story found a guide in the present, Avatar was taken to the missing scientists and introduced to Gorovan, leader of the planet's inhabitants in the past. Gorovan asked for help from Avatar in dealing with the Iconians that he said were pursuing them for stealing the singularity. While exploring the area they lost Ens. Xanyr in time, but gained and Ens Jaimeson from DaSilva's team. Story made his report to Captain Hurne and was recalled to the ship until a rescue effort could be mounted to recover the missing crewmembers.

Ensigns Redoria and Xanyr found themselves together lost between time, witnessing events from the past, present and future at random. They saw signs of the Victory's being destroyed by Romulans. The only survivor they saw was Doctor Parker. After attempting communication they discovered themselves out of phase with the others and unable to be seen by the others. They did find an interesting alien called Orovo who was in phase with them. He tried to explain what was going on, but because he was a bit off himself, didn't seem to make much progress.

Back on Victory, strange things began to happen as well. People from Victory's past began showing up walking about the ship. During a second mission briefing Lt. Kora explained that the ship was surrounded by sub-space bubbles of time and that the Victory's warp engines were aggravating the situation. It was found that putting the ship in a stationary polar orbit and taking the warp engine offline would keep problems on the ship to a minimum. Also, due to difficulty in maintaining transporter locks on the away teams, it was decided to take a shuttle with the next mission to the surface to boost the transporter locks.

On the planet, Cmdr DaSilva was finally able to contact the ship. Doc. Parker and Lt. Stevok were beamed down to his location. Lt. Kobar found herself in the past for a short time then back in the present. Unfortunately, she fell in a deep cavern when she came back to the present. Her leg was broken, but she'd discovered a control center of some kind in her fall. She was able to contact DaSilva and his team beamed to her.

Lt. Story led a team with Lt. Kora and Ens. Colon in a shuttle back to the planet's surface to the site of the disappearances. They set a sub-space communications array in an attempt to contact the lost members of the ship. Luckily it worked, Story was able to contact Avatar and after patching him through to the ship, Avatar was able to explain what was happening to the Captain.

Gorovan become angry at Avatar having his team search for more information then he'd given them. He explained that they would help him and he would 'borrow' the Victory. He wanted the ship to bombard the Iconians from space and end their threat to his people once and for all. While in a small room where they had been placed to think over what Gorovan has said, Cmdr Avatar throws his comm badge into a fire, completely destroying it. It is his hope that the disappearance of the comm badge that he had told the Captain to keep an eye on would give a sign of the trouble they were in now.

While Story's team joined DaSilva's in the control room, Kora found an old Romulan disruptor while trying to repair a console, a Romulan warship uncloaked near the Victory. They ask why a Starfleet officer had been beamed aboard their ship. It seemed Xanyr had returned to the present, but on the Romulan ship. After some explaining about the singularity and all that had been going on it is agreed that Xanyr be returned to Victory, and a Romulan team join DaSilva's team on the planet to help solve the problem. Story, Kora and Colon once again set off to explore the room that had been identified as the gate room. Down one hall they saw Redoria, and after testing with Colon's comm badge thrown through to ensure it's safe, they recovered the ensign.

In the past, Avatar learned that the Romulans had visited these people before and in the guise of helping, stole data on the gate system. Avatar is able to convince Gorovan that pulling the Romulan ship back instead of the Victory will more than solve his problems. After pulling the ship back through the gate, they are allowed to return to the present.

With the exceptions of Cmdr Avatar, Lt. Kora and Doctor Keyes from the Bimony team, everyone is beamed back to the Victory. After everyone is home safe the plan to return the Romulan ship is revealed to be a ruse and the gate system is destroyed. Avatar and the others return to Victory after using several phasers on overload to destroy the gate in past, present and future.