From 118Wiki
< Mikali sh'Shar
Jump to navigation Jump to search 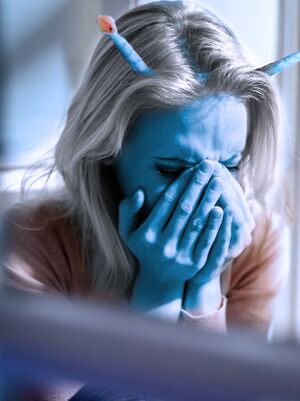 After losing her commission and relapsing, Mikali sh'Shar fell into a dark place.

Her daughter was taken, her commission was taken, and for a time, her freedom too. Having completed rehabilitation and a prison sentence, she now faces the daunting, if not impossible task of trying to rebuild her life.

Stardate 239106.14 - Lost and displaced after the decommissioning of the USS Avandar, Mikali relapsed. She spent six weeks in prison on Andoria for possession of a personal-use quantity of restricted chemicals, followed by twelve weeks in rehabilitation.

Stardate 239110.20 - sh'Shar received an General discharge from Starfleet due to her conduct, narrowly avoiding a Bad Conduct Discharge.

Factors behind the relapse

- Lost of structure after the decommissioning of the USS Avandar

- Pain from her implants, most notably her prosthetic eye

On the way to the USS Gorkon, Mikali sh'Shar makes a disturbing find.

Mikali sh'Shar comes aboard the USS Gorkon for a visit, and asks for Serren Tan's help.

"Much Ado about Benna"

Mikali sh'Shar meets one of her contacts, Tasha MacFarlane, on Iana Station on the morning of her first day and they talk about her and her motivations before her shift.

Mikali sh'Shar - Much Ado About Benna

Lieutenant Tasha MacFarlane - For the Love of a Child

Mikali sh'Shar - Mikali sh'Shar? Taking On Extra Work? Captain Vetri Might Have A Heart Attack If She Found Out...

Mikali sh'Shar has her first day at ReachOut.

Mikali sh'Shar attempts to fix Tasha's Barzan freighter, as an "extra credit" project, but things are not as smooth as they could be...

Mikali sh'Shar goes to counselling wherein, amongst other things, she is asked to perform a difficult task.

Her equilibrium disturbed, Mikali sh'Shar must keep a promise to her counsellor, even if it's painful.

Mikali sh'Shar starts making logs of her life, as requested by Carys, and a huge problem is revealed.