From 118Wiki
(Redirected from Meyharu, Javarixx)
Jump to navigation Jump to search

Javarixx Meyharu was a civilian assigned to the USS Titan and the USS Columbia.

This character is played by Glenn User:Malavatar. 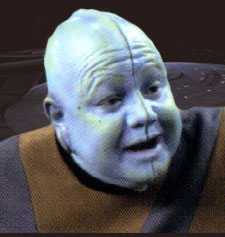 Javarixx grew up on Bolarux IX with his family. He had a relatively normal Bolian childhood, and was relatively intelligent. His father Jerado was the Captain of a Bolian Freighter and was rarely home, thus he was raised with his younger brother Koval by his mother Mitena.

His father Jerado had wanted Java to take over after he had retired. Java was resentful of his father for not being home, but eventually gave in and served aboard his father's freighter, the Cerulean for several years. His assignment was simple on board the ship, just keep track of the cargo. The Cerulean dealt with mostly legitimate merchandise, but from time to time it contained cases of illegal alcoholic beverages including Romulan Ale. The Cerulean traded valued Andorian silks and other odd clothing commodities as well as virtually every beverage available in the Alpha and Beta quadrant. It was on board the Cerulean that Java learned to make impressive drinks.

He served aboard the Cerulean for 10 years living a simple life under his father's command. In 2374, Java had built himself up enough to buy his own vessel which allowed for the expansion of the family business. He named his ship, the Cerulean II. While trading merchandise on Deep Space Nine, Java met and married a Bajoran woman named Linalla Jiada. They later had a little girl named Marileena. Java raised his family aboard his freighter until late in 2376 when the Cerulean II was attacked by a Jem'Hadar warship during the Dominion War. The Cerulean II was damaged beyond repair and would have been destroyed if not for a rescue from the USS Tenley.

The incident tore Java's family apart and his wife ran back to Bajor with his daughter. Java has not seen either of them in over 3 years.

The Dominion War destroyed the Meyharu trading company. Java's father sold his freighter and retired to Bolarus IX. Java had nowhere left to turn, until he was approached by his rescuer Captain Riggins. Java agreed to serve on board the Tenley as a civilian bartender and entertainer once the Dominion War ended.

During his fourth year aboard the Tenley, the ship was attacked. It was only through a stroke of luck that Java survived the battle. The Titan had come to the rescue of the Tenley and with nowhere left to go, Java asked Captain Draigon to serve aboard the vessel as the ship's bartender.

After serving aboard the Titan for several months, Java found himself uncomfortable with all the danger that the Titan constantly found itself in. He found an opening on the Columbia for a civilian bartender position and was accepted into that role.

In early 2382, Javarixx Meyharu was taken into custody by Starfleet security for committing treason against the United Federation of Planets. In attempt to save the life of his daughter who had been kidnapped by Orion Syndicate henchmen, Java planted several "exotic matter" explosives on board the Columbia. Shortly after his arrest, Java swallowed a suicide tablet and was found dead in his quarters.