The following information refers to a possible future revealed in the USS Veritas mission "Flashpoint". 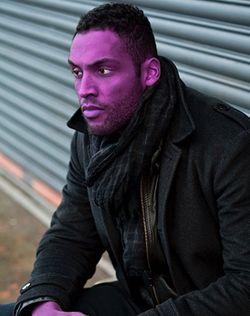 Doctor Merce Ekal was a Coverian based on Cait. He was the fiance of Ayden Blake.

Following incursion on his home planet by Breen forces, Merce heads to the "safety" of a major Federation world. He starts practicing medicine on Betazed, meeting his future fiance (a patient at the time) in 2464, referred to him by a noble Betazoid House. After several months of courtship on Jhalib's part, Merce gives his case to a fellow colleague, and the two begin a serious relationship.

Six years into their relationship, Merce and Ayden become anxious about rumors regarding an impending attack on the Betazoid homeworld. They migrate to Etamoa V, a small and out of the way M class planet, and adopt an infant Mazarite girl, naming her Nairen.

Ayden becomes eager about a work opportunity in 2477, and leaves Merce and Nairen for the better part of a year. Frustrated, and finding a suspicious name in the Federation Identification Archives from decades prior, Merce confronts Ayden about his true identity - to which Ayden explains himself and his position at the TIC. The two manage to work through a frustratingly confusing argument, and reconcile. Merce decides to then move to Cait to be with Ayden. They become engaged to marry shortly after.

When Ayden's medical condition begins to deteriorate faster than expected, Merce again expresses frustration at Ayden's never-ending determination to change their way of life and his continued ignorance of his doctor's advice.

Merce's existence was irreparably changed when Jhalib Ekal goes back in time and saves USS Veritas from destruction, thereby averting a war with the Tholian Assembly.