Difference between revisions of "Marcelo Libório" 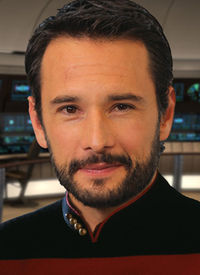 Born in 2324 and a native of Fortaleza, Brazil, Libório was a seasoned Starfleet officer and a veteran of the Cardassian border wars. Libório's wife Mariana was killed during a Cardassian raid on a Federation outpost in the early 2360s, shortly after the birth of their daughter Andressa, leaving Libório to raise his daughter alone aboard the Yamaguchi.