Captain Mal Avatar is the former commanding officer of StarBase 118 Operations and the Columbia. His current whereabouts are unknown.

This character is played by Glenn User:Malavatar. 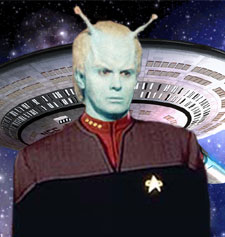 Son of a Federation Councillor, Kran Belar and a botanist, Tel Varia. Belar served for many years at the capital of the UFP but after several disagreements with Federation policy regarding the handling of the Cardassian occupation of Bajor, the alliance with the Klingon Empire, and the entrance of several worlds into the Federation, he resigned his title and returned home. While on Andor, Belar began to discover the less political aspects of life, settled down, and married a young botanist named Tel Varia and had two children.

Mal was always the athlete of the family and the student, but it was his brother Seran who always told the jokes, painted the pictures, and had the most friends. It was at this point that Kran began to write about his views about Andor. His mother was promoted to the head of the M'Gatta Botanical Gardens.

As Mal continued his introverted lifestyle; his older brother began to tour the planet as a young comedian. Andor loved Seran Cadar and it would not be long before he'd be touring the Quadrant. Mal, still in the shadow of his brother felt that he needed to go off world and build himself elsewhere. Thus he applied to the Academy. Kran Belar's writings began to become more and more controversial. Shortly before Mal left for the Academy, Kran wrote his groundbreaking essay, "The Need For a Separate Andor." Kran's views on the secession from the Federation caused much trouble with his son and as a result strongly disapproved of his entrance into Star Fleet. A Homo sapiens only club declared his father.

After not speaking to his father since the day he left for the Academy, Mal continued to grow as a person. At this point, Mal began to play an old Canadian sport known as ice hockey. Although some of his fellow cadets teased him at first, since bugs and ice don't mix. Mal got the last laugh leading the Academy team with 23 goals as well as a Galactic Title. Avatar does not speak to his father anymore, but he is in constant contact with his brother, who has had mixed results with his comedy. Apparently not everyone "gets" Andorian humor. Tel Varia continues her love of plant-life on Andor and the galaxy. Unlike her husband, she always supported Mal's decision to enter Star Fleet.

Mal greatly underachieved his freshman and sophomore years at the Academy and was at one point in danger of failing out. He spent way too much time playing ice hockey and did not focus on his studies. It was not until his junior year that Mal began to concentrate on his studies. He began to love piloting starships as well as smaller vessels. This love of flight reinvigorated an old interest in learning and his grades soon showed this.

To the outside universe, Commander Avatar spent the day of 238009.29 with the Ilyow people. However, in terms of the memories that he gained, Avatar actually spent seven years as an ambassador to the Ilyow, helping to establish first contact with that race.