John Patience Mackellar is a physician and medical specialist, currently serving in a civilian capacity aboard the USS Garuda. 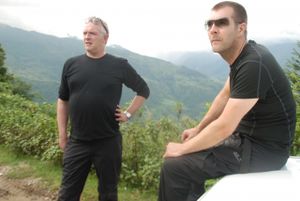 John Mackellar in the wilderness of Betazed with an old friend

Much of John's adult life has been spent working in societies in decay. This has taken a toll on him, and though he would not describe himself as jaded or cynical, people who don't know him well might mistakenly see his pragmatism as such. He objects to the disdain most humans (and others) have toward the Federation's historical "enemies," namely the Romulans and the Cardassians. Having seen both societies in the aftermaths of being nearly wiped out, he sees them as suffering peoples worthy of compassion. Given the quite different attitude and experiences most others, especially Starfleet people, have, he tends to keep quiet whenever the subject of either race comes up for debate.

At nearly forty years old, John is beginning to grow tired of constantly working in such despairing places, doing such thankless and soul-crushing work. He is starting to understand why doctors start seeking out cushy jobs in well-equipped hospitals and suburban practices when they reach his level of tenure in the practice. He hopes the work he is doing for Starfleet in general, and aboard the Garuda in particular, will be an acceptable compromise between the parts of him that want to continue the same work, and those that want him to slow down.

The first decade of John Mackellar's upbringing took place in the framework of an ordinary, nuclear family, with two professional parents, three healthy and intelligent children, and a relatively comfortable life in a good home. The divorce of John's parents wasn't particularly traumatic, and both parents were better people for having separated from each other, but the subsequent changes that occurred were difficult for the eleven-year-old John to handle. Relocated from established surroundings on a well-developed planet such as Risa to the windswept plains and scattered settlements of New Melbourne, John was uncertain of where he belonged both amongst his peers, and his extended family.

Hal Mackellar (b. 2313) is John's father. He was born on Mars Colony, one of the third generation of Mackellars to have been so. Hal studied linguistics at university on Mars and pursued post-graduate studies at the University of Risa, upon the completion of which he joined the faculty as a professor in the university's linguistics department. He met Dorothy Greenway in 2342, they married in 2349 and had three children before their separation and divorce in 2362. Always more devoted to his studies and research than his duties as a husband and father, Hal's life changed little after his ex-wife and children left Risa. He had infrequent contact with his children from that point forward, usually in the form of belated birthday messages and gifts. As of 2391, Hal is a professor emeritus at the University of Risa, and spends most of his time in any of the planet's bountiful resort communities.

Dorothy Greenway (b. 2317) is John's mother. She was born on New Melbourne Colony, and is a sixth-generation New Melburnian. The rural and largely undeveloped New Melbourne colony for careers outside agriculture and services, so after completing the first half of a library studies program in a Holoversity on New Melbourne, she left the planet to complete the program at the University of Risa in 2336. She found work in the university's law library, where she worked until leaving the planet in 2362. During her time on Risa, she married Hal Mackellar and had three children during their thirteen-year marriage. Following their divorce, she returned to New Melbourne and raised the children in her family's home. Driven and motivated, but always with a strong sense of family and the importance of doing right, John frequently refers to her as a "saint," and identifies her as an inspiration for much of the humanitarian work he's done in the past.

Donna Mackellar (b. 2354) was born on Risa, and is three years John's junior.

Mitchell "Mitch" Mackellar (b. 2359) was born on Risa, and is eight years John's junior. Just three years old when his parents separated, Mitch has virtually no memories of the family's time on Risa, and took to life on New Melbourne like a fish to water. So in love with the planet's way of life was Mitch that he pursued studies in animal husbandry in New Melbourne's technical institute, and upon turning twenty-one, set out to homestead a plot of vast, undeveloped New Melburnian arable land. Intelligent and resourceful, but possessing not a single desire for any kind of life beyond the handmade fences of his homestead, Mitch married a local girl called Agatha Whitney in 2382, and the couple dedicated themselves to a "traditional" New Melburnian life. They have five children: Claire (b. 2384), June (b. 2385), twins Mitchell, Jr., and Anthony (b. 2387) and Natalie (b. 2390). John envies his younger brother's contentment, and how well he fit into life in the colony, where John struggled to adapt, and ultimately left in frustration.

Introductory text about the character's personal history. Should be at least 5-10 lines. You can give an abbreviated timeline below, if you so desire. 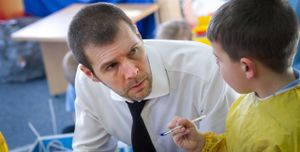 Introductory text about the character's StarFleet records. Should be at least 5-10 lines. You can give an abbreviated timeline below, if you so desire.

Detail the area that your character works in, including their personal office. Is it neat, or messy? Large, or small? etc.

Give information any subordinates your character might in charge of. If there are NPC profiles on the wiki, give links to them here.

Introductory text about archive here. Archives should be broken up into logical groups of SIMs, like vessel missions. If using that scheme, name missions by the "official" vessel mission name, or by the how it relates to the character. Example links below.