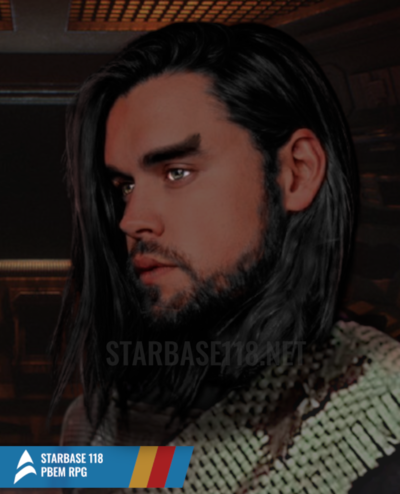 Captain LehleQ, Son of Hugorgh is a temporally displaced QuchHa' Klingon, whose battleship- the IKS qorDu was encountered by the crew of the USS Resolution in 2398. 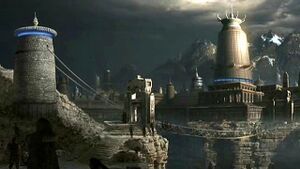 The ancient Klingon city of Qam-Chee

Born in the ancient city of Qam-Chee on Qo’noS, LehleQ was raised to be something of an overachiever. His parents believed that while QuchHa’ Klingons (those afflicted with the QuVat virus and their descendants) were just as Klingon as those not afflicted, they were unfairly stigmatised by Klingon culture. LehleQ pushed himself harder than most other Klingons his age: he had to be in the best shape, be the best with the bat’leth and the mek’leth, be the most learned and be the most popular. This drive stayed with him into adulthood- as did the constant and nagging feeling that he was lacking in some deficiency. Upon the age of ascension and enlisted with the Klingon Defence Forces, where he quickly rose through the ranks.

By the early 2360s, QuchHa’ were becoming more populous thanks to shifting societal attitudes brought about the reign of Chancellor L’Rell. In 2363, LehleQ had risen through the ranks to become the First Officer of the IKS qorDu when he challenged the ship’s captain for command after a failed raid on a remote Romulan outpost. LehleQ slew his captain in honourable combat and assumed command of the qorDu. He led several successful sorties against the Federation along the disputed border with the Empire, which solidified his standing with his crew- and with the Klingon Defence Force. Unknown to many of his crew, LehleQ was engaged in a clandestine relationship with the qorDu’s Chief Engineer, Ehek. He was noted for his intense opposition to having a science officer stationed aboard the qorDu, believing that the command deck of an imperial battlecruiser was no place for a spineless bookworm. He was also unpopular with his Communications Officer, R'Mira- who believed him to be little more than a blowhard.

In 2264, LehleQ, his crew and the qorDu were taken out of the space time continuum by the being known as CloQ. Believing that the Federation were not as peaceful as they indicated. Believing that they assimilated other cultures to reflect their values and that they hated individuality, he launched an attack upon the USS Resolution that had been caught up in the machinations of CloQ. However, unaware of the being's involvement- he believed that they had been drawn into some kind of Federation trap and recognised that the Nova-class surveyor was several generations ahead of 22nd century Federation vessels. He was witness to it's destruction and restoration when the time loop they had become trapped in began for a third time. During this time, he also began to consider R'Mira as a warrior, having spent much of their time serving together considering her as little more than an ancillary presence. Despite this, R'Mira mutinied against LehleQ when she felt he had crossed a line and took two Starfleet officers prisoner after beaming aboard the qor'Du to assist them: she slashed his throat. In the ensuing time loop, he was revived but placed under arrest, although he evaded arrest by killing two guards and beamed himself aboard the Resolution undetected as they were experiencing another warp core breach. Time reset itself once again thanks to the being known as 'CloQ' and LehleQ found himself back on the qorDu, where he was dissuaded out of assassinating R'Mira since she had an aptitude in dealing with the Federation. He agreed to work with her, but silently promised that he would kill her once they had escaped from the the time loop.(Resolution: Time In A Bottle)