Ensign Kyso Nohx is currently serving as a Counselor aboard the USS Gorkon. 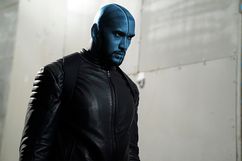 For a Bolian, Kyso's height and build is considered highly unusual. At 6'3" (or 1.92 meters) and weighing 199lbs (90kg), he towers above any other member of his family; his sheer size earning him several derogatory nicknames.

While Izos tradition sticks with most of Bolian culture by keeping heads closely shaved, it does celebrate facial hair, with Kyso usually sporting a black goatee and stubble. His skin colour is classified as Osidial (Steel Blue) with bands of darker pigment across his scalp. His eye colour can vary slightly in any given light but are naturally amber.

For much of his childhood, and well into his adolescence, Kyso was ridiculed for his physical appearance, given nicknames such as "The Angry Giant," "The Cliffs of Bole," and simply "The Tree." Because of this, Kyso became isolated from others, and kept very much to himself; preferring the company of his many pets and books. While he can be a longer, Kyso enjoys the company of others, but prolonged exposure to people –and especially crowds– can create severe bouts of anxiety.

While his early exposure to the nastiness of others could have turned him into an angry, bitter man, he has a great deal of empathy for both sapient and non-sapient life. His sense of justice and ethics drives him in all areas of life and especially in his chosen career path of Counselling. 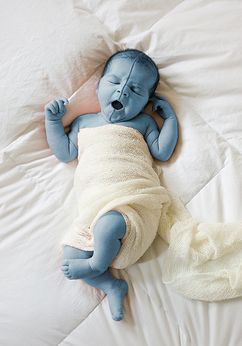 Born on the impoverished island of Izos to parents Drekk and Avaa and co-parents Mozz and Whyn, Kyso learned to get by with very little at an early age. Schools were overcrowded and resources were scarce, with his township of Nouok (formally Nouokal by Bolian standards) receiving very little support from the Bolian government. He did, however, show an unusually high aptitude for body language and critical thinking. 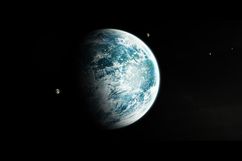 Being bullied by his peers for his unusual height and muscular form built resilience and patience and also meant he threw himself into his studies. He surpassed most other students but his thirst for intellectual challenges soon manifested in destructive tendencies, all stemming from frustration and boredom. His teenage years were especially hard and he further isolated himself from the community that would come to refer to him as “the angry giant.” 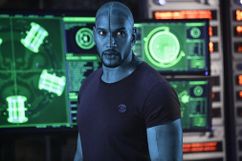 A split-second decision to shield a child from a construction accident almost cost Kyso his leg but that act of bravery gave the people of Nouok a sense of pride, especially as the Bolian media flocked to the island to highlight the story and, eventually, the plight of the Izos communities. Just a year later, the villagers had pooled their resources together to send Kyso to the Bolian Intelligence Academy where his natural talents could be developed.

The next four years at the Academy were a struggle for Kyso, as he found himself at the bottom of the class. While his intellect far surpassed his peers in his small, impoverished hometown, he struggled to meet the standard set by his fellow cadets; most of whom were priveleged enough to have access to resources he could only dream of. Never one to shy away from a challenge, Kyso knuckled down, put in the work, and eventually graduated by the skin of his teeth. He took everything he had learned and returned to Nouok, accepting a position on the local police force and making a commitment to serve and protect his hometown. 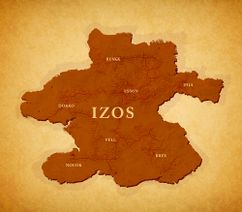 Map of Izos and its townships.

As he climbed the ranks to become a well-regarded Detective, Kyso met Illya, a social worker for troubled youths. Although Illya had been born and raised in a bustling city – with unlimited opportunities – she chose to focus on underserved communities and set up a small, non-profit organisation to shelter adolescents in need. Illya was immediately taken with Kyso but it took many months before he realised she was courting him; a deep insecurity of his unusual appearance had given him the belief no Bolian would find him attractive. The pair dated and eventually married just a year later. Three years after that, Illya proposed Lokk join their union. While Kyso was hesitant at first, he finally agreed after a three month bonding ritual.

Not long after, Illya made the decision to leave the marriage for unknown reasons. Before either Kyso or Lokk could discuss the issues with her, she disappeared, and neither have heard from her since. Grieving for the loss of his wife, and facing the pressure to add another spouse due to Izos tradition, Kyso left the police force, Izos, and Bolarus IX altogether. 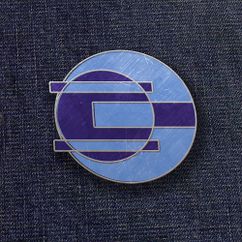 Over a year later, after some soul searching, Kyso made the decision to join Starfleet and use his detective skills to help people on a deeper level. He enrolled in Starfleet Academy to study Counselling, with a minor in Security.