Alan Pandorn is a professor of archaeology at the University of Minnesota-St. Paul. He was greatly disappointed when Krindo applied for Starfleet Academy, preferring the younger Pandorn travel in the same path as he. The two rarely speak to each other.

Susan Pandorn is a teacher at Littlefork Elementary School. It was her idea to adopt little Krindo as her own as she was unable to have anymore children after giving birth to Krindo's adopted sister, Amy. She is disappointed in both Krindo and Alan in their bickering, and tries to get them to put their differences aside.

Amy Pandorn is the one family member who made Krindo feel a part of the family as she helped Susan be a buffer between Krindo and his father. She too has aspirations to join Starfleet, but is waiting for the situation between Krindo and Alan to cool off before broaching such a subject.

Mirra Ezo is the Diplomatic Officer on the USS Columbia. Krindo first met her during the Hur'q invasion of Arndall and was attracted to her from that moment. Krindo kept his feelings about her to himself, mainly because he assumed she was more interested in Captain Whittaker, who is a long time friend of hers. It wasn't until Krindo was about to be transferred to the USS Eagle that Mirra confessed that she felt the same attraction for him, and a long distance relationship has started between them. Krindo promised to make every effort to see her as much as possible.

Krindo lived in a typical small Minnesota town in its orphanage, bouncing from home to home until finally adopted by Alan and Susan Pandorn. Since he was transferred many times as a child, his relationship with his adopted family was never close, especially with his adopted father, Alan.. He hopes that can change, but has doubts.

Krindo is slow to warm up to new people and places due to the constant moving around he did as a child. But once he gets over the initial uneasiness, he can be upbeat and not above a practical joke every now and then.

Off-duty, Krindo may be found in his quarters practicing the guitar, the style is what was called "rock-n-roll" in the 20th century, but can adapt to other styles. He is also into playing old computer game simulations adapted to the holodeck.

236707.08 - Born in Littlefork, Minnesota, Earth to anonymous parents. Put up for adoption by hospital staff.

237204.13 - Adopted by Alan and Susan Pandorn after many unsuccessful placements.

238909 - Accepted to and Enters Starfleet Academy. Majors in Tactical Theory and Security Protocols - Minors in Communications

239402 - Assigned as Chief of Security after helping to prevent a hostile takeover of the Za by alien beings.

239407 - Transferred to the USS Blackwell NCC­-58999 attached to the Andaris Task Force following the decommissioning of the Za.

239412 - Promoted to Lieutenant and assigned as Chief Tactical Officer of the USS Blackwell NCC­-58999 after mission to Burellion. 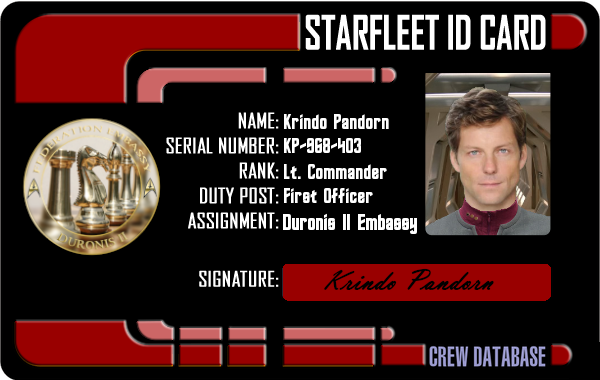