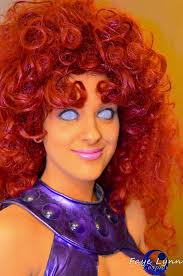 Description Koriander is tall, graceful and the picture of sexual desire. She has long curly, wavy red hair, an athletic body with skin that is a soft golden hue. Even though she is in amazing physical shape, most people never notice due to her many sensual curves and her eye's which are one solid mass of brilliant mesmerizeing green.

Backstory She was genetically created by an as yet unknown race. What is known about her DNA is that she was created useing the best aspects of 7 different races. These are as follows -

She was discovered by Lt. Tal Tel-ar inside a cryo chamber hidden amid a large amount of smuggled goods in a private cargo storage area on Starbase 118. When he activated the release mechanism and opened the container she woke up. Then her preprogramed genetic response kicked in, she sat up, bit him on the neck and absorbed his blood, the DNA of which became the final ingredient needed for her to truly become alive.

In an effort to prevent Starfleet from being able to seperate her from Lt. Tel-ar she used the knowledge she had discovered in the historical documents of Tal's people. She confronted him and demended to become his Teg'nor'oth. A sort of bodyguard warrior who will live and die for their lord. If Tal did not accept her request he would have to kill her. He accepted.

When he recieved certain crcords that he should not have Tal learned that her unstable genetic makeup had undergone a change. It had stableized. She no longer needed to be near Tel-ar. At about the same time she was offered a spot in the next class at Starfleet Academy. Tel-ar was able to convince her that she should go. He made all the arrangements to send her and lied by telling her that he had found a way to nullify her oath to be his Teg'nor'oth.

She has now shipped off to Earth and entered the Academy.

History The same individual who created Koriander seems to have had a hand in makeing certain alteration in Tal Tel-ar as well. When Tel-ar managed to gain access to certain records that he should never have been able to access he learned that truth. He was an altered Andorian. Altered by the same person who had created the female Koriander.