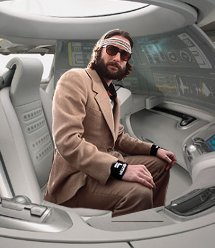 Jackford "Evil Jack" Kolk is a version of Jackford B. Kolk who was a Starfleet Lieutenant and Chief Engineer on Deep Space 17 in an alternate universe (Universe 107-LS9) until he was arrested for insubordination, and perhaps even treason, by his commanding officer, Station Commander Danny Wilde of the alternate universe. Before any further action could be taken against him, he escaped and accidentally crossed over into our universe.

Once here, he made his way onto the USS Ronin to seek his revenge on this universe's Lt. Commander Wilde but was briefly apprehended until a subspace surge from the first warp-capable Sya-Negan ship knocked out many of the Ronin's systems, including the brig's forcefields. He managed to severely injure Lt. Commander Wilde, shooting him five times, at close range, with two phaser rifles, but was then knocked out by a swift kick from Dr. Adair. He was then placed in a stasis pod that was beamed to the Ronin's brig. From there, his stasis pod was placed in the custody of DS17's Security Department.

Some time later, the Alternate Danny Wilde posed as the real one and had Evil Jack released into his custody, in order to kidnap Idril Mar and kill her (by then) husband LtCmdr. Danny Wilde. The kidnapping didn't go so well for the Alernate Danny, but Evil Jack was pleased. This universe's Danny Wilde survived, Idril was poisoned (by Evil Jack), and the alternate Wilde died trying to save her. In the end, Evil Jack ended up making off with Alternate Wilde's personalized shuttle, the SS Idril Mar, and heading off toward the Ithassa Region to do whatever evil villains do.

In Ithassa, rumor has it that he was responsible for the destruction of an FTU Trading Station in the Delphis system shortly before picking up Lt.J.G. Shepard from Layte and dropping him at DS17 with a message about how the Lt. had broken the Prime Directive. From there, he headed off toward Gorn territory meaning to enact revenge on them for the destruction they caused in his universe.

He later sent a transmition to LtCmdr. Kolk from the Cardassian system of Arawath with two sets of coordinates and the cryptic message, "Hic Iacet Iackfordus, Tyrannus Quondam Tyrannusque Futurus." (In Latin, it means, "Here Lies Jackford, the Once & Future Tyrant.") Intelligence reports indicate that the Arawath System was destroyed by a supernova at roughly the same time as when the transmission originated.

Unconfirmed sightings suggest that he may have spent several months posing as an Ensign Henry Jackal in the Science Department aboard the USS Independence, NCC-1776-A.

During an incident beginning on Stardate 238807.13, "Evil Jack" posed briefly as Commander Kolk aboard his own posting, the USS Endeavour, NCC-1895-A, taking a young Vulcan named T'Lana captive and leading the real Commander and the girl's mother, then Lt. Commander Valis on a chase throughout the ship and the Dyson Sphere that the Endeavour was investigating at the far edge of the Ithassa Region, beyond Gorn space. In the end, the girl was returned safely and "Evil Jack" was taken into custody, along with his vessel. After a mutually voluntary bridging mind meld with Commander Kolk, which served to stabilize his mental status, he and the SS Idril Mar were then sent to Deep Space 17. The vessel was impounded and he was then sent to Starbase 118 to undergo rehabilitational counselling.