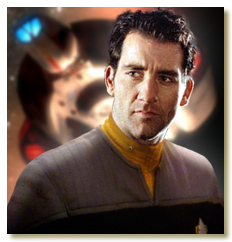 Thompson "Sniper Mcgee" Kirby's was born into a family to New Earth. Mcgee, as a child, was outgoing and had a lot of friends. He enjoys activities such as rock climbing and Kayaking. He earned the nickname "Sniper Mcgee" because in his later years he became talented with a sniper rifle and excelled past his friends in contests that they held to see who out of their group had the best accuracy. He prefers his nickname although people who are more formal call him by Thompson Kirby. Mcgee went to secondary school, graduated, and was accepted into the Starfleet Acadamy.