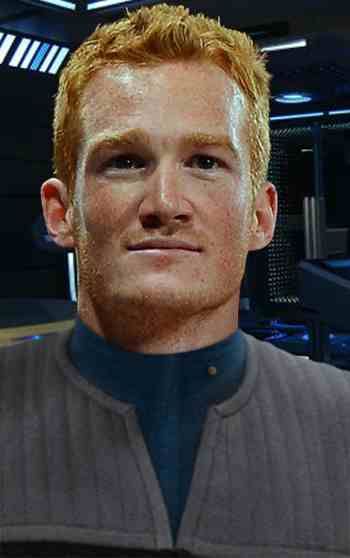 Ensign Kieran Waddell, a Terran, is currently the Nurse aboard the USS Avandar.

Kieran was brought up on the British Isles of Terra III during the 2360s and 70s. At the age of 18, after the devastation of the Dominion war and wanting to help people Kieran applied to Starfleet Academy. Unfortunately his academic grades during his latter school years had dipped and he did not score well on the entrance exam and was declined. Instead he studied nursing at a university in Paris and worked as a nurse on a Earth for several years on both ground and orbital facilities.

In 2385, a 26 year old Kieran joined Medicins Sans Frontieres and spent the next year at various locations within the Federation borders providing aid and care to those who had been affected by numerous disasters or famines both within and our with the UFP. At the end of this year, newly reinvigorated in his work helping others Kieran applied and was accepted to Starfleet Academy and began to attend the Marseille campus in France, Earth.

During his academy years he showed the academic skill he had initially during his school years but unlike those he had managed to kept his interest and effort levels up. He left the academy with a Master's degree in xenobiology and a minor in helm control. He'd also found time to fit in a few relationships, a broken engagement he still ruminates over and several achievements in swimming.