From 118Wiki
(Redirected from Khan, Marq)
Jump to navigation Jump to search 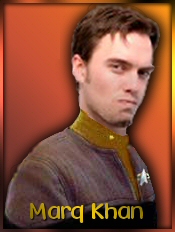 Marq is born in heart of Starfleet Command, in San Francisco. He was the only child in his family. His mother took care of him because his father wasn't at home very often. His father was an explorer and trader with unique objects. There is no much happenings in his life untill stardate 238307.16. On that stardate his family was murdered by Romulan trader because his father refuse to sell very rare statue to Romulan trader. One month later he went to Starfleet Academy.