From 118Wiki
< Kawakame Shin
Jump to navigation Jump to search

Shin was born in Kyoto, Japan, and lived there for the first ten years of his life. During his first ten years, he found himself running around with the thugs of his school despite his "wealthy" and cushioned lifestyle. Shin was heavily influenced by exaggerated and fanciful stories of pirates and similar groups, this led to his joining a local "gang" when he was five. The gang was not a very large or devious group, they mostly got in trouble for pulling pranks and shoplifting. Shin did, however, find himself in a number of fight's with rival groups and older children through his delinquent years and at the age of seven, he had his rib cracked in one of these fights which resulted in his near death from a punctured lung. Thanks to the quick and effective action taken on part of the Kyoto hospital he made a full recovery.

Shin's mother died in a transit accident during a shipping run just before he turned eleven, after that he and his father gave up their property and spent their time traveling the world.

During his time traveling with his father, he matured greatly and developed a drive for adventure. They visited China, Mongolia, Russia, Germany, The UK, and North America. While traveling across America his father met a woman from Texas and the two of them soon got married. After that, his new stepmother and stepsister joined them as they continued to travel around the world. When Shin turned seventeen their resources ran short and they returned to Texas, North America and settled down.

As a young adult, he was well known for his energy and determination, he was always active, and always working towards a goal. From the age of eighteen on to twenty Shin completed his basic schooling and got a job as a bar bouncer. He was good at his job and despite his size people soon came to realize he was dangerous if pushed. Shin spent a lot of his time playing basketball and boxing with his friends in Texas, he also got into fitness and became a gym addict. He set up a twelve-month work out system when he was nineteen that he has modified over the years but still uses to this day.

When Shin turned twenty he joined the Starfleet Academy and he managed to graduate with a 3.03 GPA and receive a degree in Tactical with a minor in Security. His first assignment after graduation was aboard the USS Wyoming. Shin was later transferted to the USS Montreal 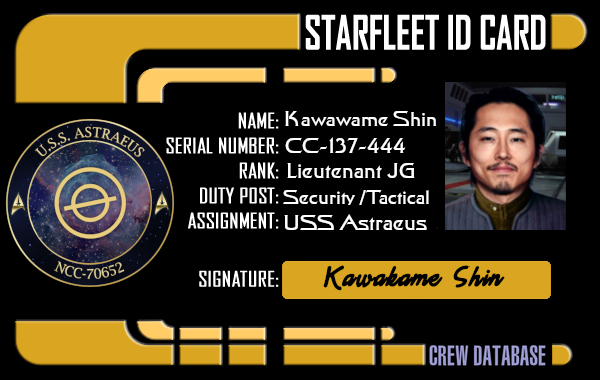 Serves as Security/Tactical Officer on the USS Montreal, a long range destroyer commanded by acting Captain, Commander Mei'konda, which is currently assigned to the Shoals region. Stardates 239510.31 - Present