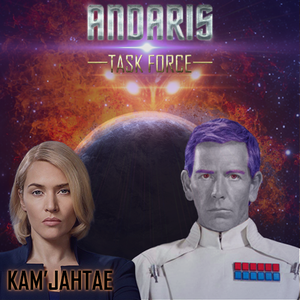 On board the Blackwell , Commander Whittaker tried to get the representatives of the two quarrelling sides to come together to resolve the dispute which brought Arndall to the brink of all out war. The petty bickering between the two seemed to never end, until it was determined that the source of the seismic upheaval was a, up to now, unknown life form waiting underneath the surface of Arndall threatening all on the planet. They were called the Kam'Jahtae, who were once considered a myth, a story to keep Caraadian children from misbehaving as reported by High Prefect Albretta Glovelyn of the Caraadians. Something needed to be done or Arndall would be overrun by the Kam'Jahtae.

At Syrandio, Lieutenants Krindo Pandorn and Sanara Pran ventured deep into the now over taken Medical Center in an effort to disable an energy dampening field that would allow their away team to escape the Kan'Jahtae, lest they be taken as slaves or killed. Commander Cayden Adyr and Lt. Commander Mirra Ezo, who was discovered inside the Medical Center, tried to buy some time with distracting the Kam'Jahatae with diplomacy, which was getting nowhere fast. Lieutenants Krindo Pandorn and Sanara Pran were successful in not only disabling the field, but were able to bring a sample of the insectoids' technology as well. They returned to the now fully powered runabout and blasted their way out of Syrandio and back to the Blackwell.

At Navatria, Lieutenant Thoran was forced inside the main complex of the invading insectoids after a hard landing after taking fire an unknown Kam'Jahtae weapon. They find a power source that would allow them to escape if disabled. Ensign Ferentis destroys it with an unusual Pakhwa'than weapon. A subsequent chase by the Kam'Jahtae led to the death of Ensign Dairro, who was shot by phaser fire. They managed to return to their runabout and was able to get back to the Blackwell.

With the help of new engineering Ensign Lewis Little, a countermeasure was developed using a sound pulse to disorient and force the Kam'Jahtae to retreat. The pulse worked, but an unknown transprter like beam transported the entire Kam'jahtae force off Arndall and out of the sector, ending the threat to Arndall. All that remains now is, where did the Kam'Jahtae go, and will the Valcarians and Caraadians cooperate with each other for the first time in the long conflict between the two, for the survival of both. Who knows?

With the data provided by the away teams, The crew of the Blackwell learn that the Kam'Jahtae are also the ancient Hur'q race, the only race ever to have conquered the Klingon homeworld of Qo'nos. What this means for the quadrant remains to be seen, but this added a whole new level of alert, since the Hur'q seem to have instant mass teleportation and can appear at any time anywhere. The Federation and allies will have to be vigilant from here on.

The crew of the Blackwell performed valiantly, which was reflected at the awards ceremony. After a moment of silent rememberance for Ensign Dairro, who gave her life in the line of duty, the crew was recognized for their performance. New arrivals Ensigns Lewis Little and Yai'enek Kortar were introduced at this time.