Difference between revisions of "Jalana Rajel"

Jalana Rajel is the Commanding Officer on the USS Constitution-B. She is a joined Trill and prefers to be addressed as Jalana, as she herself prefers non formality over formalities. She is the seventh host of the Rajel symbiont. 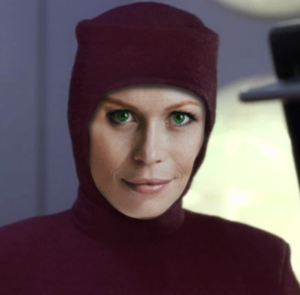 On Stardate 239108.22 Jalana learned that Viktor Lanius had been arrested by Starfleet. He was charged with several murders and the attack on another person, in that progress he had been removed from Starfleet and is now waiting court martial. Jalana has not taken the news well and was moved from her Chief Medical Officer position down to ACMO for the time being.

After returning from a time travel mission in 1914, Jalana has been promoted to Captain on SD 239212.31 by Nugra, who came to visit the Constitution. He also honored her by gifting her a Vss'Kot blade, a Gorn dagger, that had an orange gem embedded in to the silver, engraved handle, with the words: "You had once asked me about my Vss'Kot blade and I had explained to you that it is a way that a Captian of a vessel shows their achievements in the service of the leader. I present to you, this hand made Vss'Kot blade, to commemorate your rise to this hallowed position." 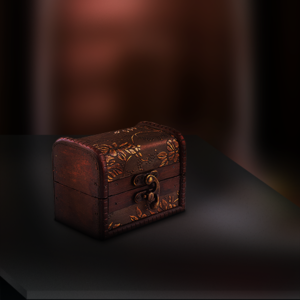 Jalana is helpless when it comes to cooking. She uses the replicator, because even the easiest meal will either burn or otherwise fail. If using the Replicator she is very eager to experiment and try out new things and does not have any favourite. She still will have to figure out if that changed after her being joined.

Also she has a little problem with alcoholic beverages. Upon trying them she usually starts to cough and hyperventilate, or spits them all over the bar to her own embarrassment. She did not find one yet, that did not cause this effect, although she keeps trying. But usually she just sticks to non alcoholic ones. Her favourite non alcoholic mixed drink is 'Coconut Kiss' a terran drink, but she exchanges the usual cherry juice against Trill Boulan Berry Juice. She learned about this drink during her academy time on Earth, introduced to her by her room-mate so she would not have to stick to water while everyone else had fancy drinks.

Jalana's favourite hot drink is Betazoid Jestral Tea. She learned to enjoy it during the training with her father, to calm her nerves.

Jalana does not like formalities and prefers to be on first name basis with everyone. So it can happen that she does use the first name without asking first and also likes when others stick the 'Ma'am' elsewhere and rank and use her name.

Jalana has learned to play the flute on Trill. The Trillian flute is a long wooden instrument with a small moveable wooden attachment, that allows a broad variety of tunes covering several octaves. It is able to be in harmony with various instrument due to this. Depending on the kind of song it can be simple or rather complicated to play. Of all instruments she had been trying as a child this was the only one she stuck to. 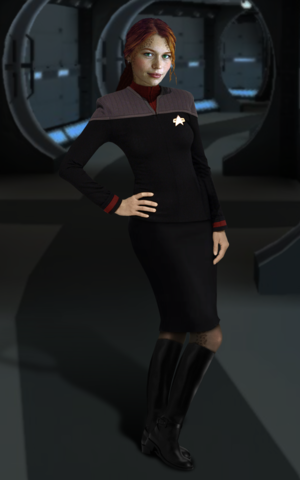 Because Vivan Laxyn wanted his daughter to follow his footsteps to become a Diplomat and one day Ambassador, he is not very supportive of Jalana's choices. In that dynamic, Jalana has the feeling to proof to her father that she can make it, even without his help.

Apria, one of her former hosts had been a Commanding Officer in the Trill Private Service. The experience of course throws shadows onto the way of her own command in Starfleet. She aims to find her own way, not too much influenced by Apria's CO style.

On duty: While the Uniform is self explanatory, she prefers the skirt style and wears it whenever possible. She combines the knee-long skirt with knee high boots. Now that she is not bound to Sick Bay anymore, she wears hair hair either in an up-do or loose.

Off Duty: Jalana prefers skirts and dresses to pants, but wears them as well. Her favourite colour to wear is a dark green, though she likes to experiment with other colors and if they go with her hair. If not for a special occassion she usually wears rather casual or casual chique. Usually she wears her hair loose off duty.

Events and formal events: She will dress accordingly to events when attending these, even if the attire would not be her taste of make her feel foolish (for example special robes or barely covering attire for special occassions on different worlds).