Callum Jae, a Betazoid, is currently a civilian on Earth. He is the older brother to Angel Jae, and was once a resident onboard the USS Tarelgan.

The parents A.J. and C.J. love and care about. Darren and Larrisa chose not to teach Callum and Angel the usual ways of a Betazoid. Instead, the two children got a Human upbringing.

Although Callum still lives with them, it doesn't seem to affect any of the three. In fact, they prefer to stick together. 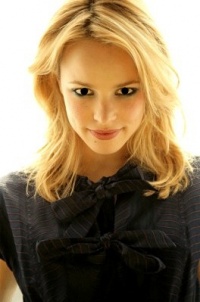 Callum's younger sister. Although he's three years older then her, she is the mature one of the siblings.

The youngest yet the most mature out of the two, Angel had trouble when she first started using her telepathy - hand telepathy, like Callum has - and it was Callum's suggestion for her to wear fingerless gloves. She agreed to it, and so Callum replicated some for her. It appears that fabric stops telepathic contact for her.

He's a joker, but he knows his place on a starship due to experience. He is a caring individual and is very much like his sister - just a childlike version.

Although would be classed as professionally irresponcible by several Vulcans, Callum knows how to work consoles regarding when it comes to Science and Helm control - Science mostly due to the fact that he constantly tried to annoy Commander Ro'Shey, and Helm control because his uncle was the Helm officer for the Tarelgan.

None are known, although like his sister, he hates being pushed around

Callum's telepathy works unusually. Like his sister, he has hand telepathy, although clothing doesn't seem to block it. If he focuses hard enough, he can feel others emotions without touching them, although this has been said to be a great strain to him.