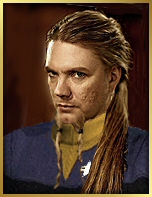 Ivan Petrov was born on a terraforming colony of an Ice world on the edge of federation space. Life in a terraforming colony is rough at the best on young people but Ivan seemed to flourish in the constant state of chaos. He grew up strong, often helping with repair around the station and also participating in some of the more mindless terraforming tasks. His mother gace hime his religous heritage and to his knowledge he is one of the only practicing folowers of the ancient Norse religions. Because of this he always had an affinity for the Klingons who would sometime trade with the station. He found their stalwart look on life comforting compared to the more timid scientists he was used to. It was this that led him to choose to leave the colony in search of a life more befitting his outlook.

Ivan found a place on a Klingon freighter called the Ko'Toth where the crew seemed to grudgingly accept him as novelty and nothing more. He thought he would have found a home on the freighter but instead only found begrudging acceptance and slight regard. Still, while he was there he made the best use he could of the time available to him and learnt as much as he could. He studied the martial arts and use of weaponry and when he had absorbed all that he could he left the freighter with the captains blessing.

Ivan spent three years working as a labourer at a mining colony but could not find it challenging. From there Ivan set his sights on starfleet academy at age 22. He felt that the overriding mission of exploration and peace keeping would present him with enough challenges to allow him to grow.

While he is for all intents a viking he does not seek battle but more challenges to test his resolve. It is his belief that not all battles lie in swords and phasers but also in the heart and mind. He would appear outwardly fearless but still has the belief that a warrior without fear is a dead warrior. He will strive to do the best that is asked of him and will always try to exceed a personal best if he has one. When off duty he is always happy and outgoing with a gragereous nature. He is always will to toast a friend, a crewmate and just about anything in the room. It is his belief that the true warrior can find joy in every moment of life and is not timid or shy about celebrating one more day of existence.