Difference between revisions of "Ithassa Region"

The Ithassa Region (Gorn: Chavesss Sector, Constellationite: Ulsjifga) is a vast expanse covering 15,000,000 ly3 of the Alpha Quadrant. The region includes various stellar phenomenae, such as the Bull's Run and the nebulae of the Aurona Sector. The region is cuboid in shape, with edges of length 1000ly, 500ly and 30ly. At Warp 9, it would take over 3 years to cross the Region at its widest point.

The initial discovery of the region is attributed to astrophysicist Sjori Ithassa, after whom the region is named in Federation records. Other local powers have differing names for the region, including the Gorn name "Chavesss Sector". Federation vessels did not begin exploration of the region until the turn of the 24th Century, with a handful of vessels being assigned before the Tomed Incident. During this first foray, the station Deep Space 17 was constructed to observe the neutron star Eratis.

Despite the redeployment of resources, the region still held some interest from the Federation. Starfleet resumed exploration of the region in the late 2360's, after ships had been freed up by the end of the Federation-Cardassian War. The fleet reclaimed Deep Space 17, which had been running on automation for the previous three decades; but withdrew once more in 2373 as resources were needed for the continuing Second Federation-Klingon War and then for the Dominion War. 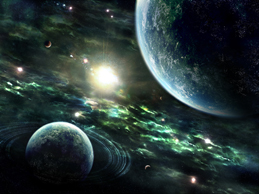 Starfleet turned its attention to the Ithassa Region for a third time in late 2379, four years after the end of the Dominion War. With Starfleet still rebuilding, a small Taskforce headed by Rear Admiral Hollis Calley was sent to once more reclaim and explore the vast region. The initial taskforce comprised of the USS Kodiak-B, USS Independence, USS Hammond and USS Triumphant, with the USS Wallace and USS Darwin following soon after. The crew of USS Wallace assisted in the second reactivation of Deep Space 17. The USS Kodiak was decommissioned for technical reasons in early 2383, with the USS Ursa Major taking her place in the taskforce.

The Federation are not the only major power in the region. At least three previously known major powers are present in the region, in the form of the Gorn Hegemony, Tzenkethi Coalition and the Tholian Assembly. There have also been reports of the Breen, and the USS Ronin has encountered the Cardassian Empire. In addition to these major powers, there are several local powers as well. The Confederacy of Core Worlds, which include the Free Trade Union, as well as the One Kingdom are examples of these. In all, the area is a politically active region, and occassionally quite a controversial one.

The powers within the Region do not always see eye to eye, and this was shown quite dramatically in the Gorn Conflict of 2383. The first casualty of the conflict was the FTU base at Furies Furnace, destroyed by the invading Gorn. The base had been the location where the Furies Furnace Treaty had been signed, which had since led to good relations between the Federation and the FTU. The base was not the last casualty, nor fatality of the conflict however.

After skirmishes throughout the region, various Starfleet vessels had been heavily damaged. The USS Tucson had required towing back to Deep Space 17, whilst the Independence was operating on a skeleton crew with a makeshift warp drive. Both managed to make it back to the station before the Gorn fleet arrived however, their objective long clear. The resultant battle ended with heavy losses on both sides, with both USS Tucson and USS First Response destroyed before the USS Ursa Major announced a ceasefire. USS Independence was destroyed when it rammed the Gorn flagship at the very end of the battle.

The loss of vital vessels in the region led to Starfleet deploying several additional starships, to replenish the fleet. Former Independence First Officer Idril Mar was given command of the USS Ronin before the Independence herself was replaced. USS Triumphant was reassigned to be permenantly attached to Deep Space 17 in 2384. Admiral Hollis and the USS Ursa Major were recalled to Earth during 2385, with most of the senior crew assigned to either the USS Independence-A or the newly dispatched USS Tiger.

In 2388, following the Hobus Supernova of 2387, some Romulan refugees have established a colony on Bilire VI and every effort to help them acclimate is being made by the crew of the Independence-A.