Life for Iria had always been a simple one filled with leisure and enjoyment of the world around her. Her father was the shaman of the Evo Clan and that position of authority exempted her from many of the usual chores that women performed. She would roam the woods around her village collecting wildflowers. As the Evo were nomadic, they continually moved about in the Kevelo forest.

The day of darkness descended on them near the winter of the planet. For a hundred years, the Evo heard stories of giant reptilian monsters and their fiery god ships that crashed on the surface at times. On that fateful day, a large party of those monsters descended on her village. The battle was a massacre as her people's weapons were no match for their long-range devices that shot burning green fire. Within the space of a few hours, her home was burned to the ground. The next thing Iria remembered was one of them picking her up. She could see he and the others that arrived were different than those who attacked. With coaxing, she was able to learn their trade language and learned they were called Gorn and the one that had saved and fed her was their leader, Nugra.

Iria learned much in the two years aboard their ships, the civil war, and how they were trapped. She learned to kill very efficiently and grew to enjoy it. The day of salvation came when the singularity re-opened and they were able to get their ship through.

Sisters of Conscience And Fidelity

Upon returning to the normal world outside of the singularity, Iria was forced into the convent of the sisters of Conscience and Fidelity. They were an ancient order that devoted themselves to the discipline of the mind and body through controlled violence. Taking young girls who were too violent or angry to function in normal society, the girls were raised and trained in the arts of the order to harness their anger and channel it into positive ideas by following the order's code. They taught Iria to focus her desire to do violence into martial art and weapons training, preferring to duel and practice instead of taking it out on other people.

At the age of nineteen, she was promoted to a Sister of the third degree and released in to the world to learn tranquility, to calm the inner spirit and to remove the need of the code by becoming peaceful inside. After five years, she was returned to her father aboard the USS Victory.

Life Aboard the Victory 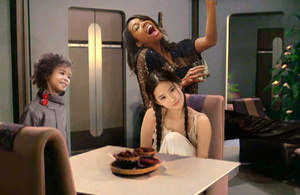 Though having trouble adapting to life outside the convent and the distance of her father, Iria found a place on the ship as the school teacher for the children of ship's crewmembers. She also became the Nanny for Talia Kaji after her son continually got himself in trouble while she was on shift. Living in the same quarters, Iria has found it to be enjoyable.

Continuing her Time with the Columbia

With the decommissioning of the USS Victory, Iria followed her friend and surrogate mother, Talia Kaji to her next assignment, the USS Columbia. Iria had become quite attached to Doctor Kaji's son, Benjiro Kaji and could not bear to leave him.

Giving up her position as a teacher, Iria has become a full time, live-in governess, who helps take care of little Ben when his mother is away on missions or working long hours at work.

After a horrible incident aboard Starbase 118, Iria left the Alpha Quadrant and went into the Gamma Quadrant where she was found by the Dryarian Confederacy. She was taken under the wing of Ashtus, a senator of the Confederacy and was given treatment for her aggression and a way to help control her psychopathic tendency.

Iria became the speaker of her people and took the name Iristi and serves as the Arda for the Confederacy. She has not intention or interest into return to the Federation. 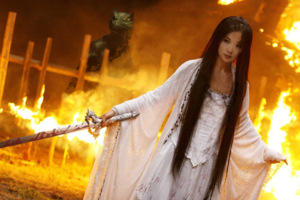 For all tense and purpose, Federation psychologists consider Iria to be a functioning psychopath. From a young age, Iria had participated in a lot of violence and killing which has stunted the growth of any conscience in her. Though a woman of 20, she has a mental state of a 16 year old girl who has yet to enter puberty.

Because of the unique nature of the world she came from, telepaths have not been able to read her, her mind being a jumble of words and sounds. This is believed to be because she came from a world that was out of step with the rest of the time continuum. Iria lives by the Code of the Convent, a set of decrees that allow her to judge when violence must be used and it has stepped in place of her conscience.

The planet Myriva was one of four planets in the Myr System that had evolved behind a warp in the space-time continuum that was accelerated to the ratio of 200 years to 1 of the regular universe years. Myriva became the host of two large Gorn fleets, the Imperials and the Rebels who spent 200 years battling each other for superiority. These battles did come to the surface of the large, green world and had also begun the legends of giant war dragons that had escaped the nether.

The planet never showed any interest in developing past the B- on the Planetary Development Scale. As the system can only be accessed once a year at just the right time, not much other information is known.