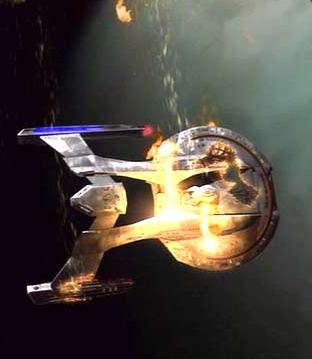 One of the earliest of the Akira-class vessels to enter service, the Indria was named after the Alpha Centauri goddess of war. Entering service bang on schedule on stardate 237103.16, she proved a capable vessel, serving for a number of years under the command of Captain Lex Thomas. Despite being designed primarily for heavy combat duty, the Indria nonetheless played a notable role in several scientific and diplomatic missions.

The Indria's career was sadly brought to an abrupt, and explosive, end at the Battle of Sector 001, when she was destroyed by the Borg. Although a number of escape pods were recovered, all of the 16 crewmen rescued were too badly injured to survive, and the vessel was officially listed as lost with all hands. Given the vessel's exemplary career, and the fact that Captain Thomas had used his ship's last few seconds of life to block a Borg salvo that would have destroyed the USS Thunderchild, Starfleet Command elected to posthumously award the entire crew the Starfleet Medal of Commendation for their actions.