Difference between revisions of "Ikaia Wong"

Ensign Ikaia Wong, a Klingon, is currently the physician's assistant aboard the USS Veritas.

Ikaia Wong doesn’t know his bio parents and never grew up in a Klingon family or surrounded by Klingon culture. Instead he was adopted by the Wongs, his human family. The middle child of three children, Ikaia grew up surrounded by a loving family in Honolulu. He was a quiet and curious child who was interested in the world around him and why it was the way it was. He often liked exploring Hawaii’s many beaches or visiting his Aunt’s alpaca farm on Moloka’i where he would eventually work during the summers in his teens. Eventually, he would follow his mother, a doctor and lifelong influence, into Starfleet to pursue medicine.

One of Ikaia’s side projects he worked on while at the Starfleet Academy is his own emergency medical hologram. He was inspired by the work his father did in the field of programming. Although the hologram is more of an extracurricular hobby, Ikaia is proud of his work. However, he says it’s still glitchy and tends to “get a bit weird if you leave it on for too long” according to him.

Currently, he is excited about his first posting in Starfleet and serving on board the USS Veritas.

Holokaia is the emergency medical hologram that Ikaia is currently working on. He has worked on this for four years as a side project which he has built himself from the ground up. His father, a programmer, is quite proud of Ikaia's work so far as it is a very ambitious project. 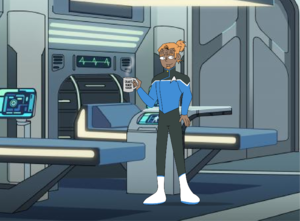