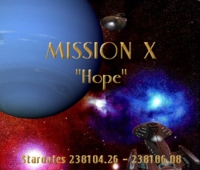 After a short stop at Starbase 118 for repairs and rest after their previous mission, the crew of the Victory set out to deliver a piece of equipment to Vulcan for study.

En-route, however, they received a distress call from the Transport ship New Hope. The New Hope reported engine failure and a decaying orbit with 1500 colonists on board. The colonist ship was orbiting a strange planet, but her orbit decayed rapidly. The Victory set out, aiming to arrive about 3 days before the New Hope's orbit would be decayed.

The Cargo vessel Dromi, under the command of Captain Karin Waelbers, an old friend from the ships counsellor,was contacted later to help evacuate the colonists. When the Victory arrived, they located and attempted to hail the New Hope. They received no response.

Counsellor Phoenix sensed some very strange things from the crew of the New Hope. They seemed to be sleeping from what he could tell. And since the scanners could not find any explanation, It was decided by Captain Hurne that even though they couldn't alert the New Hope to the fact that they would be beaming over, it was necessary. The Captain ordered the formation of several teams to beam over to the New Hope while the Victory prepared for the worst.

Team Cicero, Consisting of Ensign Solan, Ensign Margate, Ensign Beta, Commander Cicero, and a number of Security Crewmen were deployed. When they arrived on the New Hope, they found the bridge of the transport to be filled with sleeping people. Ensign Solan, along with a security team, were deployed to search the surrounding decks. They found only a few crew members, all were sound asleep. All attempts to wake the sleeping crew proved fruitless. The security team returned to the bridge, while Ensign Beta was sent to engineering to attempt repairs on the engines and sensors.

When team Cicero gave the word, Team Parker, consisting of Commander Parker, Ensign Conway, Ensign Thomas, Lt. Phoenix, and Ensign K'retok were beamed over to the engineering section of the colonist's ship.. There they repaired the lighting system and got some of the fusion reactors back on-line. However the warp core was beyond repair. They managed to start repairing the sensors, and located the bulk of the colonists. However, as they worked Lt. Phoenix was rendered unconscious by an unknown being and Doctor Parker ordered his direct evacuation to the Victory sickbay. While he was "out" he encountered the life-forms that were responsible for the unconsciousness of the crew. After he arrived on the Victory he re-awakened and reported his findings.An energy race was causing the unconsciousness, were somehow being harmed by the presence of the vessels, and were about to purge the system of them.

Meanwhile back on the New Hope Ensign Beta was unable to reach Engineering so he headed back to the bridge. As he came, he was attacked and rendered in-active by an alien creature. Ensign Margate, while in the Captains Ready room, saw a similar creature escape through a hatchway. Crewman Shote and Birns were sent to rendezvous with Ensign Beta. When they found him, he was de-activated, they started to help him, but were attacked by the mysterious energy beings. All three were then unconscious.

On the bridge Team Cicero was becoming concerned, they hadn't had much contact with the crew and a dampening field was preventing much success in an investigation. Ensigns Margate and Solan managed to repel the dampening field, after they did... scans from the Victory determined that there were several cloud like creatures on the ship. A lot of them near the cargo bay where Team Parker was stationed. Beta, who had been self-reactivated, managed to make it there. Team Parker had enclosed the area and started beaming the unconscious colonists to the Victory and an assisting freighter, the cargo vessel Dromi, when a shadow like creature was seen outside the forcefields. Commander Parker tried to communicate with it. But when she did, it flew into a rage, smashed past the forcefield, and began an attack. Commander Parker then ordered an immediate withdrawal.

Meanwhile, Team Cicero was making it's way towards the same Cargo bay, as they did, they encountered a wall-like obstacle which they could not identify. Ensign Solan discovered the wall was no wall, but a possible changeling like life-form. Later it was determined they were energy beings which had transformed temporarily to prevent the team from reaching the others.

Meanwhile, Lt. Phoenix managed to communicate again with the help of a drug administered by Lt.Cmdr Stevok which took him to the aliens realm. After a few such sessions, he managed to convince the aliens that the Victory crew and colonists hadn't meant any harm. The aliens began to withdraw from around the away teams and helped to maintain the New Hope's orbit.

The Cargo Vessel Dromi had left the system to transport the first load of colonists to a nearby colony about 10 hours away. While the Victory was on her own, everyone tried to find out how one could defend against the influences of the aliens. Sensor logs showed the beings used some sort of psychogenetic field, which caused any species in the area to fall into a deep sleep. The Captain ordered to find a way to stop the field.

On the New Hope, team Cicero, or what was left of it, beamed back to Victory and the Cargo Vessel Dromi returned from delivering several colonists to a Federation colony. The remaining colonists were beamed aboard without incident, and several marker buoys were set up around the system by the Victory so that any more ships hoping to enter the system would think twice about it, protecting the aliens from others, and protecting others from the aliens. With the assistance of nurse Petucci, one of Doctor Parker's medical staff, Commander Stevok managed to find a way to defend against the field. An ingenious re-ordering of shields, main deflector and the warpfield the Victory was now safe if the aliens decided to ignore the cease-fire.

After the evacuation of the colonists the Victory set a new course, there was a Starbase on-route and the USS Hood would take over the colonists. At the Command of Captain Hurne, Ensign Beta engaged Victory's warp engines once more and she disappeared towards her next adventure.