Ensign Quinn Holmes came from Utopia Planetia to serve aboard the USS Independence-A as an Engineer. He is also a Class III rated pilot and a member of the Starfleet Corps of Architects.

On September 3rd, 2379, QUinn entered Starfleet Academy's Engineering program and graduated on June 8, 2384. While he wasn't at the top of the class, Quinn landed well within the top ten. He is noted for his areas of specialization in hardware design, starbase and starship construction, and planetary engineering (including dome colony construction and terraforming). Halfway through his Academy years Quinn applied for and was granted entry into Flight School, picking up a Class III rating. After graduation, he spent the next three years working out of Utopia Planeta Shipyards for his residency and intern assignment until May of 2387, when he had the opportunity to apply for a transfer to the Starbase118 Fleet.

Quinn is a product of a Starfleet family, his father at one point the full time resident First Officer for the USS Northwind before retiring at the age of fifty-seven. His mother, LtCmdr Ellen Patrick (Holmes), is currently on leave from Starbase 110 where she works as the station's Chief Medical Officer. He the oldest of the children. Quinn's younger sister, Elizabeth, is in her final year at Starfleet Academy's Medical Program and the youngest of the siblings, Veronica, is pursuing a business degree outside of Starfleet.

They are an extremely close family, despite time, place and distances. It's not uncommon for either Quinn, his sisters, or their parents to unexpectedly show up without warning. Quinn spent a summer break period during the Academy on the colony world Ordell in the middle of terraforming when Veronica showed up unannounced and proceeded to bunk together while Quinn was studying domed colony construction. William spent his first retirement year knocking around the galaxy when Ellen showed up halfway to enjoy a makeshift honeymoon. They are a family with a strong work ethic, but can drop it all when one of them needs help.

A San Francisco native, Quinn was born and raised not far from Starfleet Academy San Francisco. As a child, he used to spend hours watching crafts ascend from and descend to the Academy grounds, which Quinn admits was one of a few factors in his deep seated love for machines and gagetry. His first bike never made it. Quinn shameless admits he took the two-wheeler apart to figure out how it worked before learning how to ride it. While possessed of an innate ability regarding hardware construction and design, Quinn isn't necessarily the smartest or brainiest of the bunch. But he is tenacious with a competative spirit. Quinn takes the build it/reverse engineer approach over theoretical data.

Of course, having two younger sisters might have had something to do with that competitive edge. Being the oldest of the Holmes lot, Quinn got the short end of the stick since while the kids grew up, he was labeled the "older brother", ergo, the one both Elizabeth and Veronica looked up to (or as they like to say, "beat up on when he wasn't paying attention to us!"). All three kids have their own distinct personalities, which is why Quinn has a deep rooted love for his siblings and never contended with rivalry since their interests were so varied. 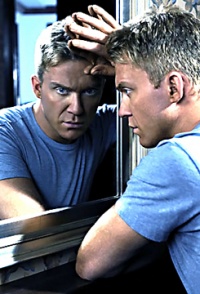 Quinn's first success came during his teens. Over the course of three years, Quinn had salvaged various parts off of scrapped vessels that were slated for destruction. The San Francisco Ship Part and Salvage Yards was Quinn's second home, unbeknownst to StarFleet. Between the ages of 13 through 15, Quinn had phfilfered enough material to build an one-seater atmospheric plane. He test flew it himself just two days shy of his 16th birthday on March 22nd, 2377. Unfortunately, the calibration of the fusion cell engine was off by one decible and Quinn's engine blew while flying over Japan. He was forced to make a crash-landing and side-swiped a basic pre-flight training group of StarFleet Academy, Japan, cadet pilots.

Upon review, the StarFleet Corps of Engineers were able to identify the individual parts Quinn had "liberated" from demolition and decided not to prosecute him. Quinn's first set of scars came out of the crash where he got burned from radiation exposure. Live and learn? Sort of...

Quinn's second attempt yeilded better results with the construction of a planetary hopper, a short-range, five seater dart with wings to buffer breakaway and slowdown speeds. He found the use of magnetic constrictors extremely useful for wing shielding and dedicated a second set just for the wings alone. A small scale matter/anti-matter power chamber was found inside the craft Quinn a bunch of his buddies from secondary school broke in the "Dartmouth" on their graduation day and skipped around inside the Sol System before they were pulled over by a patrolling starship, the USS Hornet. It was also during this time when Quinn started to suffer from a seizure-like eye flutter when working on engineering/modeling projects.

Despite the recent affliction and additional "flight without license", Quinn managed to get into Starfleet Academy San Francisco and began his "official" training with the Engineering Program. He proved to have an extraordinary aptitude with ship/engine design and construction but not so well with theoretical application. Quinn nearly failed his first year studies and forced himself to get help, which came in the guise of his mentor and one of the most profound influences in his life, a joined Trill, Ambassador Trev Hardel.

It was Hardel who opened Quinn's eyes and taught the young man how to apply his mechanical skills to overcome his flaws with theory. Hardel theorized a part of Quinn's involuntary eye flutter may be linked to comprehension and memory retrieval. "You simply process data differently from others," was Hardel's conclusion. The two of them spent a great deal of time together while Quinn was attending Starfleet Academy, and Hardel even moved himself over to Utopia Planetia when Quinn went to complete his residency. Quinn was "required", according to Starfleet Admiral Irwin Messex, to complete Flight School (it was Admiral Messex who had caught Quinn in the Dartmouth while commanding the Hornet) to satisfy the requirements of his probation.

After graduation, Quinn spent a three year residency on Mars working with Utopia Planetia Shipyards. He credited with the implimentation of two shuttle class retrofits and is known for building small scale warp engines to fit smaller craft types. During his tenure, Quinn also finished his architectural degree and implimented a revised design blueprint for a terraforming colony city. He spent a good chunk of time reviewing Utopia colony's original and current infrastructure. By the time his residency was complete, Quinn had a considerable record of starship, starbase, shipyard and planetary engineering accomplishments. 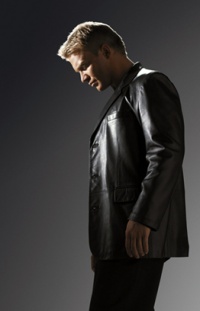 Quinn has an erratic affliction of slight seizures which causes his eyes to involuntary flutter, usually when he's utilizing memory, conceptuals and redesigning. It's a part of how he processes and impliments the left and right sides of his oversized brain noodle. If there is one thing Quinn loves, it is hardware design, whether on a small scale, like his prized 1969 Harley Davison Motorcycle restoration, or on a planetary scale (power generators, colony domes and the like). He can be somewhat erratic, but it has never detered him from following (or respecting) his fellow officers and his higher ups.

And despite the vocal promise/threat from both of his sisters saying otherwise, Quinn doesn't think he'll see himself married. Both Elizabeth and Veronica think Quinn is way too involved with his work. As he would put it, "I have engine issues." The young, but fun guy who would think himself socially awkward but holds himself just fine has his eyes feated on the golden grail of engineers: to build a space folding engine. He does alright with the science and isn't opposed to seeing what's out there, but he's a die hard engineer who's perfectly happy restoring/retrofitting a vintage craft or sipping on a glass of water (he avoids anything alcoholic, since he has no tolerance for liquor).

Quinn loves challenges (but unfortunately at times thinks he rambles too much on the impossibiities of such impossible projects at the same time). He keeps himself busy with an assortment of small projects and loves to get out riding (he had a holodeck program made for motorcycles, a particular kind of craft he fell in love with in the old holovid history Earth archives). He loves a good mystery, and keeps a small collection of mystery books (his guilty pleasure reading). He additionally builds small scale models of buildings, crafts and the like, a hobby of his that brings a great deal of pleasure. He loves to build things.

Quinn has a rugged good look to him, but he denounces it. He's not one to put in much on the physical appearance part of the equation. A good mind, fun personality, a good heart, and having something one is passionate about outweigh the look equation. If given the choice, he'd rather be in civvies than the uniform. On very rare occasions, he likes a good cigar (his father had a collection of them with a pocket humidifier, something Quinn thought had a practical application outside of preserving tobacco). While on his residency at Utopia Planetia, Quinn spent as much time outside as he did inside, perfectly happy with his colleagues and possessed with a spark of the adventure to explore the world and universe around him.

As with all, Quinn is learning about who he is within the universe and the new experiences it brings him every day.