From 118Wiki
(Redirected from Heston, Russ)
Jump to navigation Jump to search 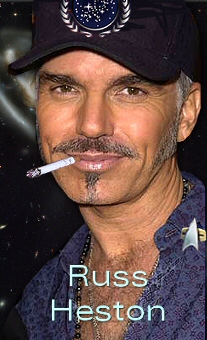 Avid Smoker, looks forward to shore leave and away missions so he can smoke in an environment where other officers and co workers will not complain. He also drinks in particular Jack Daniels is his choice of poison. When he eats, it is usually once a day and it is a large amount of food. (His favorite food is Sweet and Sour Pork)

Russ loves to spend time in the holodeck watching Ice Hockey matches. His favorite team is the 2360 Dallas Stars. His favorite player is Klaar, the first FHL Klingon player

Russ also loves 20th century Television. Early 20th century television shows like I Dream of Jeanie, Andy Griffith and Gilligans Island. (Which has led to his idea of the perfect woman being Barbara Eden)

Has an almost obsession with Combustion Vehicles. Has been using his position at Star base 318 (While awaiting assignment) To use the industrial replicate to make a reproduction of the police cycle used in CHiPs.. He keeps the parts in his closet along with a half assembled motorcycle.

One of his biggest disappointments is his Marriage. He was involved with his high school sweetheart. They got married at the Age of 18. He was Divorced by the time he was 20 and in Academy. They have 2 children (twins). She refuses to let him see them because the old lady thinks he is no good.

Russ has a strange family life. He was abused physically by his father as a boy up until his teenage years. He was abused mentally by his mother. The abuse still occasionally happens but its now more on the Emotional level, Guilt trips from his mother about his failed Marriage, The ramblings about the 'End Days' from his father. All of this he blames for his current failings and fears. (Walks with a limp that was the result of a beating his father gave him as a kid. It never healed properly. Also has a scar across his right cheek.)

Russ's parents are divorced. They broke up shortly after he went off to Academy. His parents did not care where he went, When he became a firefighter for the city he moved out of the house. Both Parents are typical examples of 'White Trash' that can be seen. Russ inherited his sense of fashion from his father

Russ worked as a Firefighter for the City of Dallas (For one year). When the Dominion attacked Earth Russ was a cadet during the attack he helped local fire crews fight some of the fires that broke out. The event is marked in his record but he turned down the commendation that was offered to him.

Graduated Last in his class in most of his major courses. Is notorious for turning his work in late or just at the deadline. During Academy he was offered a Citation of Heroism, But refused to take it. (Dominion Attack on Earth he assisted in putting out a few fires and assisted in the Evacuation of several buildings)

The Current Cruise he is on will be his second attempt. He would have passed his first, However he was forced to repeat it due to the fact he got into an argument with his Section Leader about an Evacuation. It turned out later it was a drill, But he was instructed to leave somebody behind. He complied with the order, but guilt stricken for possibly killing a man. He approached his section leader and punched him. He was made to repeat the exercise.