From 118Wiki
(Redirected from Hawker, Gypsy)
Jump to navigation Jump to search 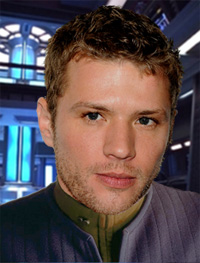 Rick Rawden is an accident-prone but talented Terran engineering officer aboard Starbase118 Ops.

Rick Rawden is devoted to his role in Star Fleet and was overjoyed to be posted to the illustrious USS Independence-A. He works very hard in engineering and is often seen toiling at his post after his shift has officially ended. He is however, a little gullible, impetuous and accident-prone. A fact brought home by his nearly getting killed during an explosion in USS Independence-A engineering department. Only the timely intervention of Captain Sidney Riley saved Rawden from certain doom.

Rawden was good friends with Leo Handley-Page; finding him a much more approachable figure than Chief Engineer Darius Clack. Page was often found showing Rawden ingenious ways to reverse-engineer a whole plethora of gadgets and machines. In 2388, they were both assigned to the mission to Bilire VI when the Independence-A was sent to assist the Romulan refugees there build a new colony. Whilst on the planet, Rick contracted the Wrath Plague and nearly died, but was returned to the Independence-A sick bay just in time. Upon his return Rick learned that Page had been arrested and imprisoned for killing Romulan rioters on Bilire VI and then transporting aboard his own star yacht, that was covertly orbiting the planet. Page insisted it was all in self-defence, but was transferred to Star Fleet JAG on DeepSpace17 for his second court martial in his career, leaving Rick without his best friend for company. Rick felt Page had been treated unfairly, and his trust and loyalty in Star Fleet was tested almost to breaking point, but the young man kept his devotion to duty foremost. For his efforts on Bilire VI he was promoted to Ensign, in part to fill the void left by the leaving of Page.

Rick is married to Siddeley 'Gypsy' Hawker-Rawden. After his promotion to Ensign, Gypsy joined Rick aboard the Independence-A for their epic mission to the Mirror Universe. Rick was busy in engineering helping to save the ship from a warp core breach, and also in helping to devise a way to get back home through the worm hole. This left Gypsy to her own devices most of the time and she felt vulnerable. The two saboteur attacks upon the Independence-A also shook Gypsy's confidence in being a civilian aboard a serving vessel, and when they returned to Deep Space 17, she persuaded Rick to take an extended Leave of Absence so they could spend some quality time together. It was on this vacation that Rick proposed to Gypsy. Both he and Gypsy returned to Starfleet to serve aboard the USS Mercury. Rick was later promoted to Lieutenant and transferred to the Tactical Dept as Weapons Specialist.

Both Rick and Gypsy requested and were granted transfers to Deep Space 6, and on 239008.21, their first child, Claire Bethany, was born.