Difference between revisions of "Ghant Xerix" 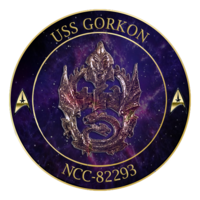 Lieutenant (JG) Ghant Xerix , Son of the Third House of Betazed, is a Betazoid/Risan Starfleet Officer. After working on the USS Veritas and the Embassy of Duronis II.
Ghant now serves aboard the USS Gorkon under the command of Rear Admiral Quinn Reynolds as the Helms, Communications and Operations Officer

Ghant is driven by a sense of duty and a desire to protect his homeworld and the Federation. He feels that Starfleet failed at protecting citizens at the battle of Betazed, the colony worlds along the Cardassian border, and a number of other instances. He is talented as a pilot and has excellent diplomatic skills, but lacks the patience and determination of some of his peers

Ghant’s mother, Celestria Xerix was one of the freedom fighters on Betazed and was lost during the ousting of the Dominion forces from their peace-loving planet. Through her, he is Son of the Third House of Betazed.

Ghant’s father Jovari was the Cultural Attaché for the Risian Ambassador to Betazed and chose to remain on Betazed and raise Ghant.

Maven Standiford helped Jovari raise Ghant, and continues to be an influential person in his life.

Ghant was betrothed at a young age to Mara Seastri, Daughter of the Fourth House of Betazed. Although many of his contemporaries chose not to follow this custom, Ghant and Mara believed in the institution and felt that each was the other’s Imzadi. Due to distance, the relationship didn't work and the two went their separate ways. There is now much hostility between the couple and the two Houses have become rivals, with Victoire caught in the middle

Ghant joined Starfleet because he believed in them, and he hoped to champion a more protective role within the Federation.

Academy -> To be added soon.

First time on the Veritas -> To be added soon.

Time at the Embassy -> To be added soon.

Time when returned to the Veritas -> To be added soon.

Time on the USS Gorkon -> To be added soon.