From 118Wiki
(Redirected from Geeva, Kalpana)
Jump to navigation Jump to search

Lieutenant Commander Geeva Kalpana, an Iridian, is currently the Chief Operations Officer for the USS Ronin. 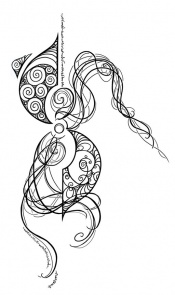 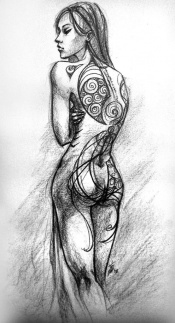 One of Kalpana's occasional stints as a life drawing model.

Kalpana is a very average person. That is, while she is very capable in many areas, she is by no means the very best (or even one of the best) in any of them. This feeling of mediocrity pervades her view of the world and she can be very tenacious in regards to anything that she considers to be 'her' area of expertise. For example, she has above average skill in piloting a solar sail vessel. If given a position of piloting such a craft, she would work very hard to keep somebody else from usurping her position, especially if she knew the person was less skilled than she.

In social situations, she tends to be friendly, but she avoids getting too close with others. In her mind, she has enough physiological issues to contend with, so she does not need to add personal relationships into the mix. She has recently become closer to Rho Falcon, and while she is willing to allow the other woman into her quarters and other 'personal' spaces, it s not yet clear exactly how she feels in regards to Rho.

Lately, Kalpana has been developing a seeming bias against terrans. It seems to be based partially on how similar her own species and theirs resemble one another, yet their moral and cultural values are vastly different. It doesn't help that she has been presented with many poor examples of terrans (based from her own perspective), but few shining examples.

Kalpana tends to nod a lot to others, especially superior officers. This seems to be an adaptation of hers, taking a terran gesture and using it in place of her culture's own gesture of respect. As it is an adopted gesture, it tends to get a little overused, mostly due to inexperience with it.

Kalpana shares the majority of her culture's views, especially those regarding personal property. In her mind, there is a very clear line between Personal and Communal property, and never the twain shall meet. Things that she owns (such as personal effects, a change of clothes, her personal 'space' in her quarters, etc.) are "hers" and never to be used or entered without her permission. On the other hand, communal items (such as most replicated items, starships, shuttles, etc.) are meant to be used by the entire community; share and share alike. In her limited-resource culture, stealing - from either an individual or from the community - is one of the worst non-fatal crimes that could be committed.

While Kalpana can intellectually understand the occasional necessity to steal something that does not belong to you, it is extremely distasteful to her. She tries hard to understand the terran viewpoint, but they seem, to her, as if they do not care about such things, just smashing and stealing to suit their own needs. This kind of attitude and the mindless property damage inflicted by any number of Starfleet vessels appalls her at times. She's not about to give up her commission, but she did have a bit of a reputation in the Academy for submitting a fairly large number of formal protests concerning actions she was ordered to undertake.

In terms of her professional career, Kalpana is enthusiastic and inquisitive. Rarely does a new finding come out that she does not double-check and try to pick apart, looking for where the researcher might have made any sort of mistake. One misgiving that she has, however, is that her choice of speciality (astrometry) plays into what she views to be a stereotype: "Iridians can feel stars, so of course they like astrosciences!" The stereotype is largely within her own mind, but even so, she tries to work against it and prove that she is an astrometer because she loves stars, not just because her race is more sensitive to gravity.

Kalpana is terrified of holodecks. There is no logical, rational basis for this fear that Federation psychologists have been able to unearth, yet it exists all the same. She has a prescription for a concoction of anti-phobic drugs to fight the symptoms and she uses it whenever she has to enter a holodeck, but every sojourn into those grid-walled rooms is a harrowing ordeal for her.

Like most of her people, Kalpana participates in a form of ancestor worship, particularly on special holidays and during stressful parts of her life. This devotion is largely private, however, and falls into the category of 'personal property'.

Kalpana, unlike the majority of the officers in Starfleet, does not speak Standard (the Federation's "official" language for internal business) with the greatest of ease. She has almost no natural aptitude for languages and, in fact, speaks only Iridian, Standard, and a smattering of Ferengi. She just barely passed the fluency test that allowed her into the Academy and, despite her best efforts, she has not improved nearly as much as anybody had hoped. While understandable, her grasp of the language is not, strictly speaking, grammatically correct. Of especial note are the lack of contractions (a personal choice, not a lack of knowledge) and her tendency to speak words that are normally implied. (Example: Rather than pointing at an individual and saying, 'Open the door, please,' she would say, 'If it does please you, you will do open the door.')

One day, Kalpana would like to see the inside of a star. She would love to physically dive within the nuclear furnace of a star's heart and see what might be lurking there. She would also love to finish any number of papers that she started and get them published, but it seems as though every time she gets one almost done, something more exciting or worrying comes along and forces her to shelve the discourse for another day.

She doesn't talk a whole lot about her life prior to the Academy, but probably her biggest disappointment / achievement combination came when she failed her Academy entrance exam the first time, only to pass it four T-years later.

Kalpana's family has managed to stay fairly connected, despite the busy lives of almost all its members. While complete gatherings are rare in modern times, they regularly exchange messages and packages.

Mother: Geeva Nitya is an experienced immunologist currently teaching at the Veem Institute of Medicine in the Iridi system. Outsiders have been known to say that Kalpana is the spitting image of her mother, leaving both to wonder who is doing this 'spitting' and why. The two keep very open lines of communication, and Kalpana often calls on her mother for medical advice, much to the chagrin of her shipboard doctors. She has a near-perfect grasp of languages, speaking over three dozen fluently.

Father: Geeva Vivek is the kind of man you would not want to meet in a dark alley, late at night. He stands close to seven feet tall (2.13m) and has a fair bit of muscle on him. He is a geologist by trade, specifically dealing with planetoids, which keeps him out in space and away from home most of the time. Still, Kalpana learned a lot from her father about living in the universe, so she goes out of her way to say hello every now and then, or send him any interesting specimens that she comes across.

Brother: Geeva Ananta is two T-years younger than Kalpana, but he also has about two years' more experience with the universa than she does, as he went right to work after graduating from the Keepiru Culinary Institute. Within six T-months, he had a position on Aryuntia Station in the nearby K'enp system (Benke 36D-14). In return for turning the communal mess hall into a low-G environment, he dutifully serves up four meals a day and coordinates the efforts of two dozen kitchen personnel. In all, they serve some six thousand miners and engineers.

Kalpana's early years were spent shuffling between her home world and her father's small survey vessel, taking trips with him to investigate the various planetoids mucking about the system. This was her first taste of exploration and it got her hooked for life. Her planet-side life, while exciting, was nothing compared to the joys of sailing about on the very edge of explored space (the edge as far as she was concerned, at least).

As she grew older, her responsibilities and obligations increased and her trips out with her father became fewer and farther between. She still got into space regularly, but there were no more week-long excursions to the edge of the solar disc. During this period, she also began looking into what to do with her life. An uncle pointed her towards Starfleet and, in a bout of exuberance, she applied. A few weeks later, she learned that she had failed the entrance exam, showing that sheer desire cannot get you everywhere. Trying to take things in stride, she reevaluated her goals and took a slightly different track.

Intending on pursuing a civilian career, Kalpana enrolled the in-system Venek Science Institute and began studying a number of general science courses, with a specialty in astro-sciences. During the course of her four years spent studying here, her uncle and parents convinced her to try again with Starfleet Academy. Far more mature and prepared than she was four years prior, and bearing a fresh degree in astrophysics, Kalpana passed the entrance exam with above average scores. Not perfect, but then, not everybody can be top of their class.

At the Academy, Kalpana spent a fair bit of time acclimating herself to the rigors and changes that come with being an iridian in Starfleet. Through all of this, she pursued courses in the sciences, and passed with above average grades in nearly all of her classes. Rarely the 'best', she tended to fall into the upper ten percent, though. It seems to be her lot in life to always be second best.

"Geeva Kalpana is an apt pupil, an adequate officer, and refreshingly average. She shows some amount of promise, although an unhealthy adherence to the precepts of her birth culture is sure to hold her back in the future. She has a definite conflict with what she perceives to be 'illegal' actions regularly undertaken by modern Starfleet crews, and her superiors are advised to keep a close eye on her for just such a reason. I, for one, would rather watch and be impressed, than not watch and be surprised." -- Admiral Jane DuGalle, Academy Mentor.

Her walls are sparsely decorated with a few pictures, mostly of backgrounds that just happen to have people in them: her family and some friends. Her desk and coffee table, meanwhile, are decorated with numerous PADDs, usually reports, and always organized in some fashion or another. She abhors having things out of place if she can avoid it.

Leading off of the main room are two doors. The right-hand door leads to her bedroom and the attached bathroom, the former of which is probably the most-decorated room in Kalpana's quarters. Small, personal items adorn the walls and various shelves and furniture in the room, with the crowning item being a terran-style teddy bear that can usually be found sitting atop the pillows on her neatly-made bed. The left-hand door is usually left closed, as it leads to an otherwise unused room and second bathroom.

Kalpana tends to keep the gravity in her quarters at approximately 0.9 G, a nice mid-point between her birth gravity and that of Starfleet. Also, every other day, the air pressure and composition are regulated to that of her birth world for health reasons.