PART I: Return to Kaclla II

Two years have passed since the Challenger visited Kaclla II. Now Fleet Captain T'Pen and her crew, aboard the newly commissioned USS Challenger-A are being sent back. This time their mission is to assess the Kacllan governments application for admission to the Federation. Just as the ship is leaving DS24, word comes through of a fleet redistribution, and Commander Toni Turner takes part of the crew to her new command, the USS Resolution, with Commander Samal Frazier becoming First Officer onboard the Challenger.

The remaining crew continued on to Kaclla II. Midway an explosion on deck 14 blew out a section of the forward hull, damaging the forward torpedo control and destroying most of the micro labs, killing many working in that section. (Note: Edgar Mosely, civilian, was orphaned in this explosion. LtCmdr Jerry Reid, MD, would later begin the adoption process for Edgar.) 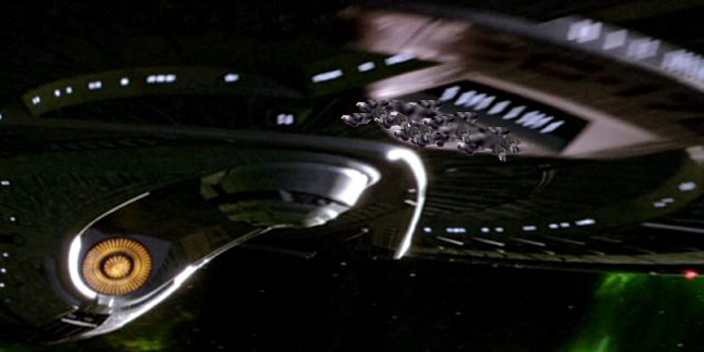 Engineering emergency crews, including Lt Chalmers and Ensign Thomas, quickly responded and were instrumental in saving the ship. Ltjg Turc Brakur and the security department investigated and discovered the remains of an ultritium shaped charge, a clear sign of sabotage. With the heavy level of damage, supplies were running low due to the repairs. A solution was found, when the Challengers new science officer Lt Marcus Dickens contacted the ship from the science station Ambrosia. Arrangements were made to send a group of runabouts to bring Lt Dickens along with some supplies back to the ship.

With the additional supplies the Challenger was able to make it to Kaclla II with no further problems. Upon arrival a team was sent to the planet to begin the talks. Ensign Mailea Labria of the Diplomatic Corps was sent to conduct the talks, with Ensign K’jharr in charge of security, and Lt Dickens and Ensign Tallis remaining with the Irwin to conduct a survey of the planet, and to serve as go-between between the away team and the ship.

Ensign Labria had conducted initial talks with the Pifili and was beginning with the Aarakoccran government when, unbeknownst to the Kacllans or the Challenger crew, a small mercenary group hidden in a small, abandoned Federation observation station hacked into an Aarakoccran destroyers control systems and caused them to fire upon a Pifili destroyer, and then dropped the Aarakoccran ships shields allowing them Pifili to destroy them, sparking a war. The station was hidden on a small asteroid on the outer edge of the asteroid field and was considered obsolete. When the fighting started, the away team quickly evacuated to the Irwin, with the intent to return to the Challenger. 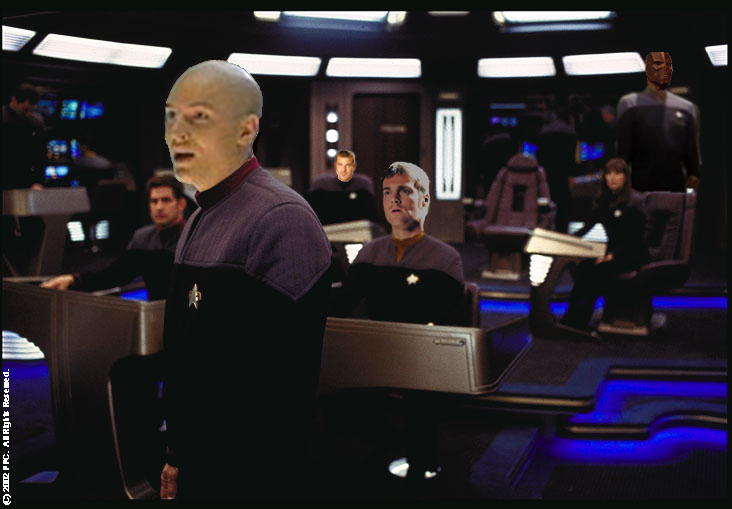 The bridge of the USS Challenger-A during the Kacllan space battle, CMDR Frazier is standing in the foreground, LTjg Turc Brakur stands at the back of the bridge

The Kacllan rebel groups lead by Theoderan and Ower Orld used the space battle as a distraction to kidnap the government leaders Overlord Me-ow and Prothoa Withaa, with the intent to force the Federation to leave Kaclla II. At the same time the Irwin was forced down by weapons fire, injuring Ensign K’jharr in the process.

While this was under way Lt. Commander Tal Tel-ar was leading a small party of marines in what appeared to be a wild goose chase to try and find the broadcasting location of a strange encrypted tight beamed frequency. They were lucky and discovered the source which proved to be a couple Romulan, Tal Shiar agents. Unfortunately the escaped after blowing up the cave they had been useing as a base.