From 118Wiki
(Redirected from Farnsworth, Charlotte)
Jump to navigation Jump to search

Charlotte Farnsworth is the mirror universe version of Necessity James; she is a PNPC written and controlled by Nathaniel Wilmer.

Charlotte "Charlie" Farnsworth (real name Necessity Alice James) was born on the Mirror Universe Earth in the year 2367. Her parents, having been Terran slaves, were experts in transporter modification technology. Gaining access to such technology, for unknown reasons (possibly compassion for their daughter) they beamed their newborn infant to the Prime Universe. Whether by intention, accident, or some unknown reason, Charlotte's life improved as a direct result of this abandonment. Charlotte was found, swaddled, and alone on the streets of Oxford, by the Farnsworth family. She was given the adopted name Charlotte Callisto Farnsworth and was raised in an environment of relative ease, education and love.

Nevertheless, things had stirred in her from her infancy. Emotional issues of abandonment had always haunted her; though she had never actually known the reason why. She was always restless, and bored with her lifestyle; always instinctively feeling that something unknown was missing from her life. At the age of eleven she turned to a life of crime, picking pockets, developing sociopath behavior and learning to lie. Neither her parents or psychologists ever knew why such impulses were inside her; having no apparent causes in her upbringing.

In November of 2378 while Charlotte was meeting with Starfleet psychologists to be counseled; she met (then) Crewman Nate Wilmer at Jupiter Station. She was picking the pockets of aliens and delegates as they came of the transports in the docking area. Nate spotted her immediately, and rather than take her to the Chief of Security, saw intelligence and promise in the girl. He succeeded in convincing her parents in allowing her to join a Starfleet Academy preparatory program. For the next four years, both he and Master Chief Dick Sullivan served as her primary educators for Starfleet rules and regulations.

In 2383, Charlie visited planet Ares III with Nate. She was to take her Starfleet Entrance Exams at the local outpost. However, she ultimately failed her xeno-botany entrance exam due to lack of confidence. Starfleet Academy entrance and admissions personnel also identified several personality flaws in her, including dishonesty, manipulative techniques and lack of moral compass. When Starfleet did not pan out of her, she eventually moved away from Earth, to Jupiter Station, where she got involved with Ferengi. The DaiMon promised promised her a job as the new poster girl for their new Grenthemen Water Hopper account. For a time, their promises of modeling were actually made true. But eventually, like all things Ferengi, her contract ran out, and she had to resort to life as a dabo girl at the Cosmic Cafe on Jupiter Station, to earn income.

Eventually, Charlotte got tired of being pinched, grabbed and prodded by drunk bar patrons and took a job a second class engineers mate onboard a Cardassian freighter known as the "Razbu." At one point, at an unknown date (roughly after 2383 but before 2391) Nate and Charlie began dating and spent a vacation together in Switzerland on Earth. There, Charlotte had made plans to propose to Nate. However, she would not get her chance. Nate announced to her that he was returning to Starfleet Academy Command School; leaving the enlisted branch intending to become an officer. For years, while Nate retrained and pursued his officers rank, Charlie drifted.

Upon hearing of Nate's graduation and posting the USS Excalibur-A, Charlotte traveled, soon to meet up with him on his new ship. After forging marriage documents and lying to the Captain of that vessel- stating that she was in fact Nate's wife; Charlie opened a bar aboard ship. When Nate learned about this, he used the opportunity of transfer to switch vessels to the USS Apollo-A. However, he could not escape her. Charlie's obsession with him and her fear of abandonment simply compelled her to move with him. After a second move to the USS Apollo-A, Charlie gained permission from Admiral Jaxx, to open up Club Olympus. Vessel after vessel, transfer after transfer, Charlie would follow Nate. After changing jobs many times, Charlie would eventually land a job as a school teach on the USS Constitution-B, where Nate was once posted as First Officer.

Counselor Rune Jolara once had the opportunity to psychoanalyze Charlotte. She categorized her behavior as ,'a most destructive and corrosive influence on Nathaniel Wilmer's confidence, productiveness and emotional well-being.'

Aboard the Constitution, fate soon dealt its hand. Through a chance encounter with Necessity James, and some involuntary medical exams, it was scientifically revealed that Charlie and Nessa were both the same person. After intense medical scans, and invasive tests run at Starfleet Intelligence on Earth, it was determined that Charlie did not and had not ever belonged in the Prime Universe. However, Starfleet seeing that she wished to cooperate, granted her amnesty and asylum from her mirror universe home, in exchange for an 8 month cooperative study of her physiology and mental capacities. Nessa James, also agreed to participate in exchange for the reinstatement of her officers rank. Nate on the other hand took an 8 month LOA as First Officer, to serve as emotional support for both his friend and former lover.

During the span of examinations, emotions ran high, as the three lived isolated in a ward which had limited outside contact. Day by day they spent with each other. This did not help her self-esteem, as she found the incarceration to have a negative effect on her relationship with Nate. Charlie also watched in horror, as she observed Nate and Nessa grew closer together. This only furthered her depression and lack of self worth.

According to Starfleet Counselors; in Charlotte's mind, Necessity James was the pure and unspoiled version of herself and Charlie viewed herself as the corrupted imitation. Nevertheless, before long, none of that mattered anymore. The tests were over, and everyone was free to go.

Upon exiting the quarantine, Nate's career eventually took him to the Delta Quadrant. This time however, Charlie did not follow. She wandered the universe in Nate's old Peregrine class shuttle. Wandering aimlessly from port to port, having no home, and no purpose.

Before long however, Charlotte found her way to the USS Blackwell, which was Nate's most current posting. There, after a rekindling of their romance, Nate and Charlotte got engaged, and planned to be married on October 31st, 2394. After helping the crew of the Blackwell with some engineering disasters, Charlie's found that her interest in rejoining Starfleet Academy returned. She speculated that should she return, she would pursue a career as an engineer someday.

Further information to be added at later date... 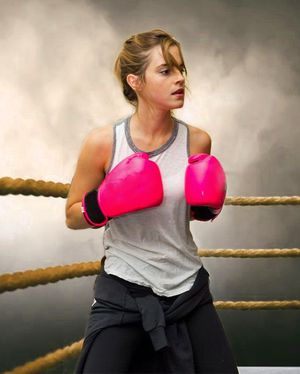 Charlotte Farnsworth in the ring, circa 2394-2396
Retrieved from "https://wiki.starbase118.net/wiki/index.php?title=Charlotte_Farnsworth&oldid=305908"
Categories: