From 118Wiki
(Redirected from Falls, Nick)
Jump to navigation Jump to search

Lieutenant JG Nickemor Falls, a joined Trill, is currently a Tactical officer aboard the USS Mercury. He previously served aboard the USS Avandar for a short period of time before requesting another transfer elsewhere.

Was joined to the Falls symbiont, of which has had three hosts.

Having lived for 77 years, Xolak had been married (and consequentially divorced) five times. Four times Xolak had his heart broken for various reasons, and only once did he decide to end one of his marriages. He later died as a single man.

Stace Falls was also a Starfleet officer, having died in the line of duty. She know Theo Casey, Nick's current husband, rather well - too well, to the point where she had formed an attraction to the Ornaran/Terran hybrid male. To this day, Nick remains uncertain whether his feelings for Theo were his own, or if they are Stace's.

The only one capable of being joined to the Falls symbiont at the time, Nick became close with Theo Casey, explaining all of Stace's feelings. The two later pursued a relationship, marrying early 2388. 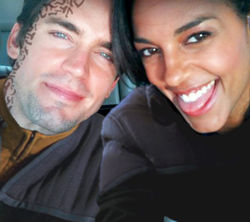 Nick and Jess probably having too much fun at the Mercury's relaunch party on Deep Space 10.

The two served together aboard the USS Avandar. However, Nick was only stationed aboard for the period of two days, having experienced the Avandar's mission on "Eden", where he had lived another's life and "died" - his symbiont never passed on to another host, and therefore killing the two previous hosts as well as himself. When they were returned to the "real time", Nick was told by friends that Theo continued living his life on Eden with little to no problem, and had not even mourned Nick's 'death', causing the Trill to question if Theo would even miss him if he had actually died. This caused an irreparable rift between them, the two arguing for the better part of a year, and spending the beginning of 2391 and onwards not speaking at all. Theo had even decided to resign his commission, not even bothering to inform Nick let alone discuss it. Nick had filed for a divorce prior departing Deep Space 10 aboard the USS Mercury.

Nick is good friends with Jess Webber, the Mercury's Operations officer, having met her when they were first posted to the Mercury. He confided to her about his divorce, and how Theo had responded to the news in a not-so-kind manner. Despite her saying that he should talk to the counsellor aboard about the situation, he claimed that he knew when he was "pushing himself too hard", and that in the event that he was pushing himself too hard, Jess would politely inform him of it.