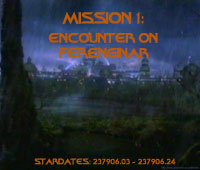 Just prior to the launching of the Victory, the Kodiak had just returned from the Lithron system where they had uncovered the wreckage of the Daedalus Class USS Glory. On the surface it was discovered that the Ferengi had attempted a salvage operation, but it was incomplete. The Kodiak was forced to leave the Lithron system and the Spider Nebula after the crew was maddened by hallucinations caused by an alien race known as the Ilyow. En route to Starbase 118, Ensign Mal Avatar discovered that the computer core was sold to a Tellarite collector named Kraxis Fajo. The data from the core was transmitted to the Kodiak where Avatar and Lieutenant J.G. Cicero were able to recover the data using a holodeck simulation, even though the data had been purged. What they determined was that several of the Glory crew survived the crash.

The Victory's first mission was to complete the Kodiak's last mission. It was determined that Kraxis Fajo would be on Ferenginar over the next few days as part of a Ferengi Trade Fair. Prior to their arrival at the Ferengi homeworld, Ensigns Jeffrey Hatton and Trexia Lok joined the crew as did Ensigns Makal Kora and Lotra Dyron later on in this mission.

When they arrived at the planet, Lieutenant Commander M'Gret led an away team to the surface. While at the fair, Lieutenants Avatar and Story were able to locate Fajo. The Tellarite collector informed the two that it was he who had cleared the computer core's databanks and used up-to-date Starfleet data in order to unravel the mystery of the Ilyow. As Fajo was explaining this, two Ferengi agents barged into the tent and severely injured him with their whips. Story followed the agents, while Avatar returned to the ship with Fajo. On the ship, Doctor Parker did what she could to stabilize Fajo, but he only regained consciousness a few more times before he died.

Meanwhile two Ferengi Marauders met up with the Victory, but Commander Hurne was able to talk them out of firing their weapons and let the Victory resume their investigation. Commander M'Gret and Lieutenant Story reluctantly agreed to let the Ferengi authorities handle the murder investigation and returned to the ship.

On his deathbed, Fajo informed Commander Hurne that the crew was stranded on the planet Lython also in the Spider Nebula. Just prior to his passing, he gave Lieutenant Avatar the codes to enter his ship on the surface where his journal was stored. Commander Hurne ordered an away team of Avatar, Hatton, and Parker. Parker would use the corpse of Fajo as a distraction while Avatar and Hatton uncovered the journal. While attempting the recover the journal, the team meets resistance from Ferengi forces. The away team is forced to break Fajo's ship out of the dock and attempt to return to the ship. The marauders in orbit of the planet now pursue Fajo's ship, but before they can destroy the ship, Commander Hurne successfully makes contact with the Grand Nagus who agrees to let the Victory crew leave.