Non-Laudean craft are assigned at a number of locations. 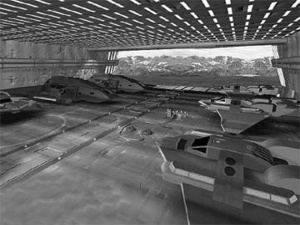 Embassy Craft at the Lokesh Spaceport

There are three Starfleet Runabouts stationed on Duronis II:

The USS Martin Luther King Jr. is stored in the bunker located under the main Embassy building, able to launch from the bay door located to the south of the Embassy. It is used primarily as a transport option for the Ambassador and senior staff when engagements require travel. It can also, however, be used as an emergency escape vehicle for the Embassy staff, and can evacuate up to forty people in one launch. Any remaining crew can utilize the Hopper, transporters to access the nearby launch facility, or an orbiting vessel.

The other Runabouts and one Hopper are stored at a secure launching facility within Lokesh's small makeshift spaceport. Located approximately thirty kilometers from the main Embassy building but accessible by ground transportation or transporter.

There are two Hoppers assigned to Duronis II:

Hoppers were designed for a variety of different assignments ranging from zero-g troop deployment to mobile ground ops and heavy ordinance deployment. They were created through necessity in late 2347 as a direct response to the Setlik III massacre and the following outbreak of hostilities with the Cardassian Union.

One of Starfleet's two Hoppers on Duronis II is always stored next to the Runabout Martin Luther King Jr in the Embassy's subterranean hanger bay. The second hopper is stored with the other Runabouts at a secured launching facility approximately thirty kilometers from the main Embassy building.

Both Hoppers are configured as colonial transport vehicles, rated to move people short-range interstellar. The Hopper's were assigned to Duronis II given the planet's unstable post-revolutionary political state. Their purpose is primarily as an emergency escape vehicle for the Embassy staff, and can evacuate up to forty-eight people in one launch. Any remaining crew can utilize the runabout, transporters to access the nearby launch facility, or an orbiting vessel.

The newest edition to the Federation Embassy on Duronis II is the Tactical Wing. The Tactical Wing and its pilots serve as aerial and orbital defense for the Embassy as well as performing other specific missions such as escort, reconnaissance, etc.

The Shadow is a stealth fighter loaned by Starfleet Intelligence to Duronis II Embassy. It has all the capabilities of a regular shuttle, but it is equipped with the stealth technology and black matte hull with no markings. Only selected personnel can fly the shuttle, and can either be found at the Embassy or embarked on the Thor during missions. It has an enhanced sensor array and standard weaponry.