Template:Embassy The Ambassador's Office is located in a secured wing of the Embassy Complex. It is only a short walk from the Ambassador's Home - designed with an older ambassador in mind. The Office area actually incorporates a reception and secretarial area, a small private conference room, a turbolift and the actual Ambassadorial Office. 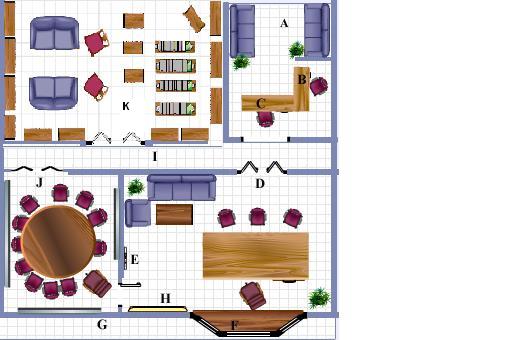 Upon reaching the end of the corridor you will be greeted by a T-shaped dead end. To either side are a black leather sofa and plant. Meanwhile facing you are two separate desks in an L-shape - one with the owner's back to the left wall, the other cutting into the corridor and blocking access to the Office beyond.

The desk to the left belongs to Lt.Cmdr Shartara and is as far as most senior staff need to proceed - passing reports to her and liaising with the experienced Rutian whose desk is always covered with her multitasking. It is also where many senior staff come to get their gossip in addition to answers to official questions, without getting Rocar out of meetings.

At the desk blocking the corridor sits a young Terran who, through shyness, only speaks when spoken to. This is where Senior Staff with an appointment, or a precise need to see the Ambassador, go. It is also where guests, VIPs and visitors proceed to announce their arrival. Often Yeomen Colt will politely ask the arrivals to take a seat on one of the black sofas unless the Ambassador has asked her to show them through immediately. From this desk the Ambassador's entire schedule is run. Just behind and to the left of the desk stands a Starfleet Marine.

Immediately behind Colt's desk is a large double door allowing access to Rocar's personal Office and the corridor turns off to both sides - on the left to a turbolift down to the basement shuttle hangar deck, to the right to another dead end on the left of which is the entrance to the Ambassador's personal conference room where staff meetings and negotiations with Rocar present are always held. 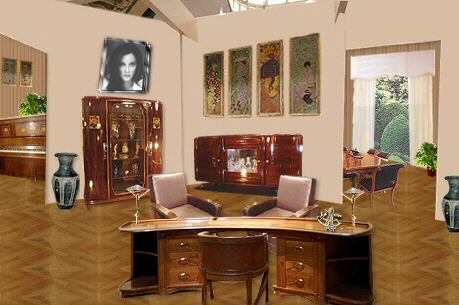 Upon entering Rocar's office you are immediately greeted by a large bay window that curves outwards into the Embassy grounds. In front of the window is a large Art Nouveau style desk on which there are several objects:

Behind the desk is the Ambassador's large seat and in front three smaller chairs which are rarely used. To the right of the bay window is a large canvas painting of the USS Constitution-B in orbit of Starbase 118 which was given to Rocar by Captain Nekkar when he left the base. Opposite the large canvas painting against the opposite wall is a large sofa and armchair around a coffee table. This is where Rocar conducts most of his chats in his office, usually serving a beverage from the replicator to the right of the chair. Next to this replicator is a small one person door that allows access to the Ambassador's personal conference room.

All commanding officers have a set of personal items on display in their office. Rocar's is not the most lavishly decorated, but there are certain special items that all visitors might notice:

The personal conference room is roughly a third the size of the Ambassador's personal office. The embassy contains a large number of meeting and conference room but this is the only one constantly reserved solely for the Ambassador's personal use. Any meeting he is in will be held here, from full staff meetings to negotiations. The main feature is the large circular conference room table at the centre of the room. Each of the four walls contains an identical computer screen for presentations allowing people sitting in a circle on the black leather seats to each get a view. These screens work in synchronization but can be set to each give the presentation in a different language so that each delegation facing a different direction can follow a readout. Rocar always sits in his usual seat, which is the one nearest the single door leading to his office. Next to the viewscreen on the wall to his office is the flag of the United Federation of Planets. Apart from the Ambassador, everyone else arrives through the double door that leads to the corridor and back to the reception area.

This room is perhaps best known for being the crime scene when Lt.(jg) Elaine Furlong was murdered.

This Library requires Level 4 security clearance. Essentially only Captains and Flag Officers have access. The Library is freely available to any officers with the rank of captain or higher that visit the Embassy, but generally it is only usually used by Captain Rocar.

Within the seal of the United Federation of Planets in the carpet at the centre, there are a set of chairs. The walls are covered with old fashioned books collected from around Duronis II. Mostly cataloguing Laudean history, art, culture and fiction - it is a wealth of information on the Laudean people.