The mission of the Medical Department is to ensure that Starfleet personnel get the care they need for their physical and mental health. Medical Division personnel are also often deeply involved with research projects of their own and work closely with their colleagues in the Science Department.

The medical facilities are housed in a seperate Medical Center on the Embassy grounds. The first floor of the Medical Center houses the CMO's office, a conference room, three surgical suites, a lab, two private recovery rooms, and many biobeds. The second floor of the Medical Center has four more recovery rooms, a gym and health centre, and a physical therapy area. The second floor is also where you'll find the Chief Counsellor's Office, four smaller therapy rooms, and two rooms dedicated to sleep and psychological testing. 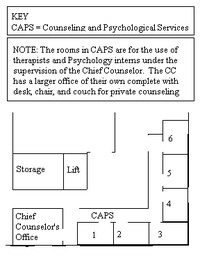 The Embassy Counseling Department (also known as Counseling and Psychological Services (CAPS)) is located on the second floor of the Embassy Medical Center. It houses the Chief Counselors office and six smaller therapy rooms, connected by an L-shaped hallway separated from the rest of the second floor. The Chief Counselors office is a large space housing a desk, several chairs and a couch. It is designed to provide a space conducive to therapy sessions.

The six therapy rooms are smaller. Four of the six contain two comfortable chairs. These are for the use of therapists and Psychology interns under the Chief Counselors supervision. Rooms 5 and 6 are set up for sleep and other psychological tests.

The Embassy Medical Unit is equipped with one EMH named Bobby (affectionately called, Doctor Bobby), that supplements the medical staff during times of emergency, and also serves with the relief team. Bobby is capable of diagnosing and performing treatments by tapping into the over 2,000 medical references in its data bank.