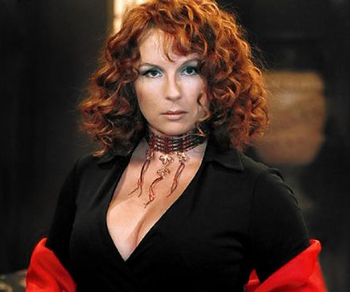 Elvira van der Loop is the current Entertainment editor of the Federation News Service. Widely regarded as an outrageous, neurotic and self absorbed hack, Elvira cares little for journalistic standards and is known as the woman who always gets her man, or woman. While her section of the FNS is sometimes decried as nothing more than a tabloid rag, she was the one who discovered and promoted most of the major bands and artists of the last three decades, along with several notable photographers, models and holoactors. While some of her critics say she is just supremely lucky and was at a series of right places at the right time, Elvira's luck has held ever since, though she clearly has the power to make her own luck with her powerful position as an archon of pop culture.

While Elvira, her way of reporting and her section of the FNS experienced a golden age during the tenure of former editor Aimea Vostinael, Elvira had several squabbles with the woman that impeded their working relationship. While regarded as frivolous and unethical, to her credit, Elvira was the one who prevented Aimea from sacking the more independent and progressive journalists of the FNS in the late 2370s, threatening to leak the story. Through this use of leverage Elivra had palatinate authority over her journalistic sphere and was free to publish things as she saw fit, in stark contrast to the restrictive requirements placed on editors like Isabella Coronado.

After Aimea was ousted, Elvira was on a shortlist for the editorship but it was given to the recently famous Reza Kardgar instead. Unlike many of the major section editors, Elvira did not resign in protest, another testament to her character. After Reza himself stepped down in 2392, Elvira was once again in the running.