It wasn’t until medical school that he was able identify his own strengths and has slowly grown in confidence. He is very hard-working; eager to please and easily hurt when he feels embarrassed. In social situations, he tends to hold back and doesn’t like to be the center of attention, preferring interactions with smaller groups. During his time on board the USS Resolution Eliaan developed confidence in his ability as a doctor and was eventually able to assert himself. A naturally caring person, he crew very close to his small medical staff. 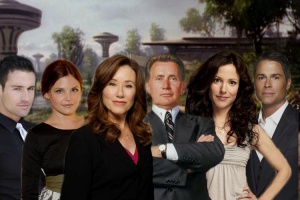 The elder of Eliaan’s two sisters, Deone Deron, is the black sheep of the family. Deone bucked family tradition and didn’t become a doctor. She spent several years traveling before returning to Betazed to become a sculptor. The two regularly correspond and are particularly close.

The baby of the Deron family, Eliaan had a happy childhood on Betazed. He was surrounded by loving family and older siblings who doted on him. As a child he was particularly close to his brother, whom he hero worshiped. His mother wrote a book on the development of children, which included many anecdotes about Eliaan and would embarrass him greatly as he got older.

Great things were expected from the youngest Deron. Despite being clever in his own right, he never quite matched the intellectual ability of his siblings. He worked incredibly hard to achieve top grades; although in later life he would recognize that in order to do this he missed out in a lot of normal experiences.

After working together side by side, Eliaan came to realize how strongly he felt for the Trill and that he was allowing his grief to hold him back. They eventually began dating and spent several weeks of shore leave together on the Terran colony of New Madrid where they were able to get to know each other out side of sickbay. 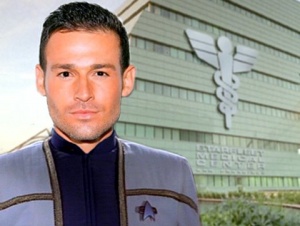 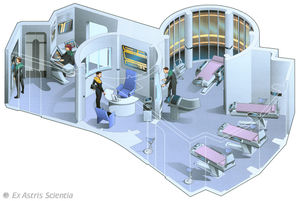 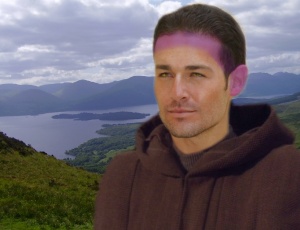 Following the mission, Eliaan and Kaedyn spent their shore leave together. Upon returning to the Resolution, Eliaan's surgical abilities were once more required as Major Heath West was beamed aboard the ship partially assimilated by Borg technology, which had been implanted in him prior to assignment to the Resolution. In the midst of the crisis, Eliaan temporarily relieved Commander Turner of command of the Resolution. The surgical removal of his Borg components was successful and Major West made a full recovery and Commander Turner returned to duty the following day. Eliaan was promoted to Lieutenant (junior grade). A few weeks later, the USS Resolution was recalled.

Following temporary assignments on the USS Independence-A and the USS Discovery, Eliaan was assigned to Starbase 173 as the Chief Medical Officer.

During his year long leave of absence from Starfleet, Eliaan took a medical research position on Betazed.

Eliaan returned to Starfleet in the unfamiliar role of Assistant Chief Science Officer on the USS Victory under the command of Captain Andrus Jaxx and alongside many other friends from his time on the Resolution.

I have had the pleasure of several meetings with Cadet Eliaan Deron during his time at Starfleet medical and I have found him a pleasant, personable young man. A major facet of Cadet Deron’s personality that I noticed immediately during our first session is his eagerness to please those around him. He believes that if he is able to impress others (particularly superiors) with his actions or, it will make them like him.

I believe this is a result of his family life. From his own description, Cadet Deron grew up in a home where worth was measured in achievements. His difficult relationship with his father has left him terrified of disappointing anyone. He therefore places a great deal of pressure upon himself to match up to the achievements of his family, especially his older siblings and the expectations that he assumes others have of him.

I have found a dramatic difference in Cadet Deron since his temporary assignment on Vilar 2. In many ways, he seemed considerably younger that his age before this time. He returned from this assignment, more mature and surer of his own abilities.

Having engaged in his first serious relationship, Cadet Deron suffered a very traumatic loss while on Vilar 2. In general, he remains reluctant to talk about this and I have seen benefit when trying to press him on the subject. He has reported bouts of depression, which I believe are a normal part of the grieving process. I would hope that in time, he is able to discuss this more freely with a Counsellor he trusts, accepting that he may not wish to discuss such issues during an Academy psychological evaluation.

At several points during our discussions, I wondered who was evaluating who. Cadet Deron has an interesting habit of making it seem like you are talking about him but in fact he’s not giving anything away and is steering the conversation back to how you feel or think. He is very reluctant to give too much away, although in my own experience he became more engaged during our later sessions.

While the issues described above are pertinent to Cadet Deron’s psychological well being, I believe they will have little effect on his ability to act as a Starfleet officer or a physician. I hereby certify that Cadet Eliaan Deron is mentally fit for duty and wish him well in his future endeavors.