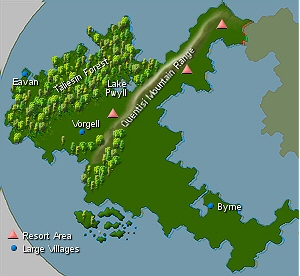 The Quentisi Mountain Range runs from the from southwestern Devi to the upmost part of the northeastern tip, virtually splitting the Providence into two parts. The range is dotted with three major Resort Areas.

To the west (mid range), Lake Pwyll, named for a god of cunning and virture, and the Quentisi Mountains guard the east entrance to the Taliesin Forest, a wilderness area believed to be magical. Lore has it that those brave enough to walk in the forest hear music and poetry emitting from the woods and emerge with great wisdom.

The village of Vorgel relies on tourist trade, while Eavan the west most village, Byrne to the east, serve as ports for trade, to supply the Quentisi Mountain Range area.

Kassa: This is a map of Devi showing the reference points of the Quentisi Mountain Range. As you can see, it runs from southwestern Devi to the upmost part of the northern peninsula, virtually splitting the Providence into two parts. The range is dotted with three major Resort Areas. The terrorists would want to be in a more secluded area so they could hide large amount of explosives, weaponry, etc., and allude monitoring. So we can rule out the resort areas and populated villages.

Kassa: ::points to Lake Pwyll:: The east entrance to the Taliesin Forest is obstructed by Lake Pwyll to the south, the Quentisi Mountains to the east, and the sea on the north. It’s all wilderness and rugged terrain, and the Laudeans believe it to be magical. Lore has it that those brave enough to survive a walk in the Taliesin Forest emerge with great wisdom. This is where I would start looking.