From 118Wiki
(Redirected from Driscoll, Vanessa)
Jump to navigation Jump to search

Vanessa Driscoll, a Human, is currently a science officer aboard the USS Gemini.

In her free time, she prefers comfortable, casual clothing. Most of the time she wears normal jeans combined with shirts or tops. Occasionally she also wears skater dresses.

Vanessa doesn't have many belongings, because she has never really been attached to many things. This can also be seen when you enter her quarters. The room is usually quite plain and simple with only a handful of decoration items. Most of the items she keeps in her quarters have a special meaning to her. Vanessa owns a photograph of her home planet Toral IV, where she was born and raised and where her family still lives. Apart from that she has a photograph of her family, which normally stands at her desk. Those two photos are the things she treasures most as they remind her of her childhood days. Vanessa loves music. She learned to play the tin whistle as a child and made music together with her brother and mother. Although she does not play it anymore really, she takes it with her to every new assignment. She also likes to sing, but doesn't do it in public.

Vanessa often plays around with strands of her hair when she is brooding over important things.

Vanessa likes to socialise, meet and talk to other people. Sometimes, however, she needs some time on her own. She likes to listen to music or read. She has never been shy and found it quite easy to find friends at the Academy.

This changed a bit after the Academy, when she served on the USS Discovery-C. There, she experienced some traumatic events that made her more reluctant in forming closer relationships with others. She is afraid to make close friends or even fall in love as she is afraid of being hurt or losing their loved ones. So she tries to keep a professional distance. When she eventually considers someone a friend, she is a good sport. You can be quite sure that she likes you when she starts to banter with you.

She likes sports as it helps her to work off stress and to clear her mind when something stresses or depresses her.

Vanessa is usually a calm and serene person. One thing, however, which caused some problems at the Academy, was that she tends to act out of her emotions and gut feelings before thinking. She is working hard to get this under control, but it is not always working. Whe she is nervous, she is sometimes a bit too talkative.

From her childhood days onwards, Vanessa gets claustrophobic fears when she is in small spaces. Crawling around in Jeffries tubes always makes her nervous and she has to concentrate on the task at hand to suppress the fear of being stuck. Another side effect of this is that she doesn't feel too well in dark places. This is all due to an experience in her early childhood, when she was playing around in a cave near her home and got stuck in one of the narrow tunnels there. She can hardly remember the event itself, but the fear is still there.

Since the events on the Discovery-C and the tragic loss of the man she had fallen in love with, she is somewhat afraid to form too close relationships with the people working with her. She is afraid of losing them and getting hurt by that, so she tries to keep them at an emotional distance.

On stardate 236712.12 Vanessa Driscoll was born as second child to Mary and James Driscoll in New Cork, on the Federation colony of Toral IV. She had a carefree childhood growing up at the farm of her father. She had a very close relation to her older brother, who always supported her and always stood on her side. At the age of 12, she was already trained in using a phaser, as her father needed every hand to protect the farm against some of the wild animals on the colony world. When she was 16, she made up her mind on her future and told her parents that she wanted to join Starfleet. Her father was strictly against the idea, because he thought of the future of the farm and his family on the rather new colony. But her father’s refusal did not discourage her – quite the contrary was true. In the end and with the support of her brother and mother, her father allowed her to apply – although he still hoped she would not be admitted. When she was admitted, he had to accept it eventually. 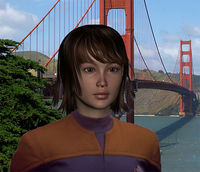 So shortly before turning 18, Vanessa enrolled at Starfleet Academy in San Francisco and moved to her parents’ original home world, the Earth. She did not have much trouble finding new friends there and enjoyed the time they spent socialising. Her academic performance was average, which was mainly due to the fact that she often spent her free time with her friends instead of learning for her courses. Nevertheless, she was able to pass the courses, even the ones, she was not that much interested in. She liked the tactics courses, which resulted in good results in that field, as well as science courses and physical education.

When she had finished the General studies program, it was quite hard for her to decide ona special field of expertise, so she took courses in both security and science. However, this meant that she had to concentrate more on learning. In the last two Academy yearsple she finally spent more time on learning. It was at that time that strong, black coffee became her favourite drink. In the end she didn’t rank among the best, but she had improved and achieved good results.

After her cadet cruise, Vanessa Driscoll was assigned to the USS Discovery-C as Security officer. There she feel in love with the engineer Roatsn Frye. They had a nice date after the return of the Discovery-C, but then Lt Frye was killed in the following mission. This was atraumatic experience for her and caused a change in behaviour. She is somewhat afraid to form closer relationships as she is afraid to be hurt again or losing someone she likes or loves again.