Rocar enjoys all forms of Skiing; particularly on the slopes of his homeworld of Ktaria VII. This was a hobby the Rocar practiced a lot when he was stationed at the Federation Embassy on the planet Duronis II. 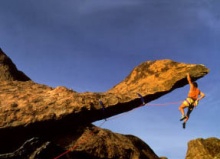 Rocar Rock Climbing in the Holodeck

Rocar has long been an avid rock climber. Even as a teenager when he got in to trouble for climbing a forbidden mountain on Vulcan. (see Rocar's teenage years article). Over the years he has continued to climb on away missions and for fun. Rocar was once taken to an American Football match in the holodeck by Lt.Cmdr. John Sheriden, but the Ktarian did not understand much about the terran's favourite sport. He is, however, always intrigued and eager to learn about alien culture's sporting practices.

At the Academy and as a junior officer Rocar was known to play racket ball, however, he has not played in recent years due to not having someone to play against. Rocar sometimes practices boxing and hand-to-hand with his Chief of Security Cyrus Webb. More regularly, however, he can be found working out (particularly on the weights) in the officer's gym between 16 hundred and 18 hundred hours every weekday; and can be found Rock Climbing on the holodeck every Saturday morning.

Rocar is a brilliant concert pianist. He had a Ktarian grand piano in his quarters on Starbase 118 and has won many prizes at Ktarian music festivals, though he never boasts of his musical ability. Playing the Ktarian Grand Piano is difficult since it has brown keys inserted between the black and white keys to play demi-semitones. Interestingly, he also has a small upright piano in the corner of his ready room aboard the USS Aegis He also interpret folk songs from around the Federation on an acoustic folk Guitar from Ktaria VII (with 9 Strings), something he started during his days as a medical student.

One of Rocar's main hobbies is Cooking. His speciality being Ktarian Chocolate Puff with 17 different varieties of Chocolate which he makes from his maternal grandmother's family recipe. Rocar has had a corner of his personal quarters converted into a kitchen area with special utensils. Most evenings. Rocar tends to avoid using the replicator: Instead, he enjoys a trip to the Starbase’s promenade where he likes to purchase genuine fresh food ingredients from the many alien traders. To Rocar this is one of the principal advantages to being assigned to a Starbase over a starship. Moreover, Upon his return to Starbase 118 as Commanding Officer, Rocar has requested and procured a small allotment space in one of the Starbase's natural areas. Although he has never had any experience in gardening, he plans to try growing fresh vegetables (with which to cook) on his lot and firmly intends to take-up and develop this new passtime/hobby. He secretly hopes that the allotment space will alow him a quiet a peacful place to which he can escape from the stresses and hassle of busy life (and his job) on the Starbase.

Before joining Starfleet Rocar was a junior bio-medical scientist on both Earth (under Dr. Mirzan) and at the Vulcan Science academy under Prof. Solvak. Rocar's research interests began in inter-species compatibility and in the early years of his career tried to develop a Genesis Device Mark 2 which failed in the early stages of experimentation.

During the Dominion War Rocar was assigned to work on the Zerentares project at a penal colony near Betazed. The repercussions of which still haunt Rocar today. Several officers under Rocar's command have been suspicious or had raised interest given the Ktarian's reluctance to talk about what went on during the Zerentares project and it is clear to many that the Starfleet Captain still feels guilty today.

As an Ensign, Rocar helped find a cure for a Naeveus virus epidemic and as a Lt.Jg. on Starbase 118 Rocar discovered and experimented on an unusual substance known as Jytzell Fluid