The Double Shot is the crew lounge on the Ronin, although is currently unowned. But just because it isn't owned, doesn't mean that Fabrini Tom Florence won't run it. It was previously owned by two other Ferengi who seemed to have moved on to bigger and better things.

The Double Shot can be found on Deck 5 Starboard, handy for the Junior Officer's. It is open throughout the shifts, offering the patrons a little more than just a drink. It is a relaxing atmosphere, catering to all walks of ship life. The replicator system installed can produce any meal on the ship but the cook, Bolan, prefers to cook himself.

A typical Crew Lounge on an Akira-Class vessel would consist of a seating area with a few sofas and playable games to improve logic while providing relaxation. A cooking area would be readily avaliable for a live-in ship's Cook and several tables for dining. The Ronin also has a Security Officer stationed on the same deck as the Double Shot. The crew are not under constant suspicion, but if anything happens there is a Security officer to respond effectively. 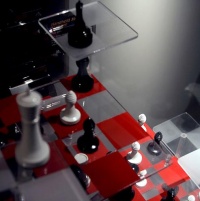 Tri-D Chess
A popular game within the Double Shot is Tri-D Chess, or Three Dimensional Chess. While amazingly frustrating for those not Vulcan, it is an amusing past time and a logical challenge for mental stimulation. Details of the chess game and rules can be found at Memory Alpha

Most officers frequent the bar after their shift, if not to drink then just to catch up with their friends and neighbours, to encounter more then just their duty stations and to find out what's going on in the ship around them. The Double Shot is the source of social life on board the vessel and support for the morale of the crew. There has been many a time that the crew of the Ronin have found themselves in need of a friend. The Double Shot provides it every time.