Situation: The crew is taken back into the 1970's as part of a Police Division in the UK.

The Challenger crew are on their way back to Earth for Shore Leave when they are caught in a temporal time loop. When they arrive on Earth, they have to choose a remote location for landing due to the time change; it's now 1973 and are instantly recognised as the local police force once they enter the city of Manchester, England.

They find after a few days that the day repeats itself until they solve the crime. They must solve the crimes or crime committed by using old age fashions they haven't got a clue about and they cannot research in order to fix the temporal loop.

The crime is committed by a gang calling themselves 'The Hunters'. Multiple murders have been committed around the area and the Division NCC12886 or Northwest Crime Commission 12886 has been drafted in to help locate the gang. Underneath the guise of the serial killers, the Devidians are using the neural energy of the victims and also the crew members to open the time loop for themselves and escape back home.

Each player can have their choice of another identity, calling themselves by an assumed name if necessary but the crew know one another. Once the Challenger has been left, they can't return to it again until after they've completed the mission. They have to use knowledge from the 1970s and 1970s police methods to find the gang members.

The mission ended with a Battle Royal between the Romulans and a Armada of Starfleet ships lead by the Challenger in which DS24 was destroyed. But they the real foe stepped forward and turned back time obliterating any sign of a battle. DS24 was not destroyed nor was there any signs of an Armada or Romulan ships. It was as if nothing had happened at all. 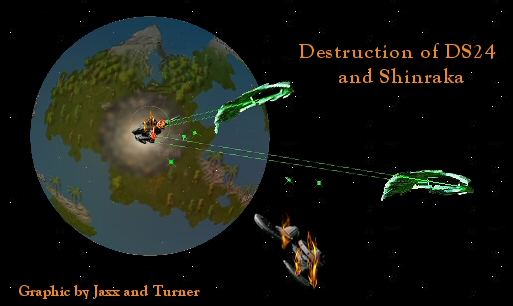