From 118Wiki
< Denali Station
Jump to navigation Jump to search

The Operations Center is akin to a ship's bridge - with stations for the various departments to work from and coordinate. It is the de facto nerve center of the Station and where much of the Senior staff will come together to brief each other, decide on courses of action, and generally work together. 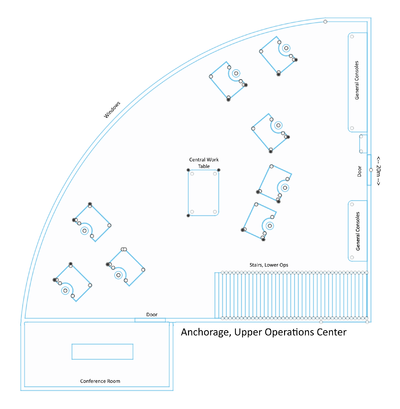 The Upper Level is laid out in a series of workstations around a central table, similar to a Main Engineering or other collaborative work space. The center table receives large amounts of sensor input from probes, other ships, and whatever assets are in the area. The workstations surrounding the table are in a roughly circular formation and can be used by most specialties - configured at will for their needs.

The room is flanked on two sides by windows, taking up an entire third of Anchorage's 11th floor, and is entered by a lift in the center of the room or the stairs which lead to the Lower Level.

The Lower Level of the Operations Center is mostly concerned with traffic control operations - both airspace operations above and around the city and ground operations. Marine, Tactical, and Security Personnel will man this area along with other officers as necessary to handle the routine tasks needed to ensure safe ground, air, and space traffic. Other functions may be assigned to this area as needed.