Lt. Commander Darius Clack, is currently the First Officer aboard the USS Tiger-A. 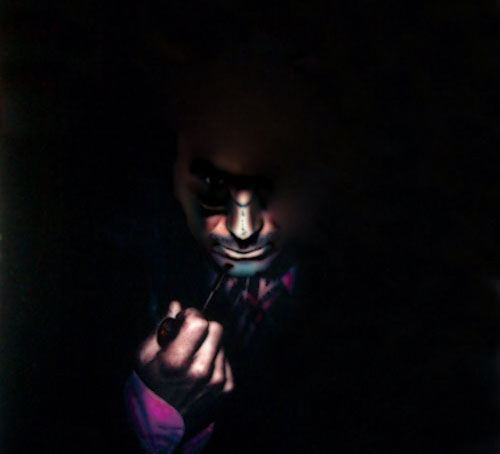 His eyes change color according to the emotional feeling he experiences at that particular moment. The colors range from blue to red. 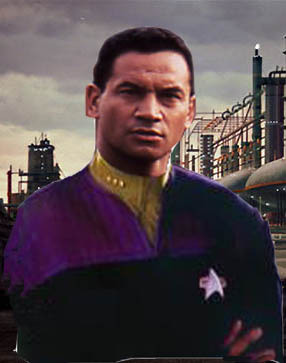 Darius Clack has often been misunderstood to those around him due to his awkward presence. On the USS Ursa Major, he was not thought of very well among the crew as a result. His nickname at the academy was Eldritch, meaning strange or unearthly.

Darius is very anti-social and not easily approachable. It is often said that you don't speak to Darius Clack, you listen to him.

Darius Clack is a man that appears to be on a mission to unlock a terrible secret. As a result, he is a mystery to everyone around him. At times he appears to be so preoccupied with his own thoughts that it puts people around him in danger. Darius is also an alcoholic.

Clack projects an ominious cloud of darkness around him that often causes others to avoid him. He suffers from violent nightmares, images of death and murder from another man's life. Although he had been known to fly into angry fits of rage, Clack always performs his job to the best of his abilities.

Due to his wierd mystic, those around him are never sure how he will respond when faced with a certain situation. He seems almost eager at times to join forces with those who threaten the safety of the ship.

Darius Clack is a man who is not impressed by rank or the opportunity to advance through the ranks provided by Starfleet.

Darius is extremely gifted in the fields of fluid dynamics and computational physics. Much of his talent was explored in his early years (while serving on the Saint Vitus' Dance) planning explosives and biological warfare attacks. His talent was finally given a chance to develop fully when he entered Starfleet Academy at age 20.

Darius Clack longs for the life that he can only relive through dreams and images. He has a deep desire for power and glory. So far, his life in StarFleet has been unable to satisfy this deep spiritual itch.

By accident, he acquire Katherine Sharkey as his wife. However, the marriage was never consummated and will be void in two years time. The marriage has brought no comfort to him.

Very little is known about his family apart from rumor and speculation. Clack has remained very secretative concerning any family members that he may have for reasons unknown.

Darius has never revealed to Star fleet officials the presence of any offspring.

Darius revealed that one parent was full-blooded Terran while the other was a Klingon Augment. He doesn't have any knowledge of his parents. It is rumored that his father was General Miles O'Keefe but this cannot be verified.

No information is available concerning any brothers or sisters. Only Darius Clack knows the answer.

Darius was one of the few that survived the attack on Camp Cameron by Federation Forces. Camp Cameron was a military compound located in Australia run by General Miles O'Keefe. General O'Keefe was discovered to be an off-shoot of the Eugenics War. O'Keefe, who quickly rose through the political ranks of the Federation, closely followed the teachings of Khan Nooien Singh. He was even offered a seat on the Federation Council but declined. Many people were killed as he secretly organized a army of resurrected 'superman' through the alliance of an alien race called the Algamerians. The attack on Camp Cameron became known as Bleeding Sun for the locals. The fifteen year old Darius surrendered to Federation troops as the camp smoldered in ruins. The young boy suffered from amnesia that prevented him from having any recollection of his life prior to that day. He had around his neck an identification tag with the symbol X engraved upon it. Below it, carved into the metal was the name Darius Clack. It would be the name that he would take for the rest of his life.

Although highly unlikely, it was reported from the other survivors that Darius Clack was killed from a point blank blast from a disruptor rifle to the head prior to the attack of Federation Forces. They also calm the young boy was quickly engulfed in a cloud of light and vanished only to reappear in good health again minutes later. Physically, Clack is in perfect health with no physical defects other than deep scar tissue on his back and arms as a result of such a hard life.

Darius appears to show signs of schizophrenia but tests show no sign of such mental disorder. Records indicate a preoccupation with someone or something name Shaba. Further study is needed to verify.

Darius Clack is a clone of Darius Shalmar, the son of Representative General Miles O'Keefe, created to carry out an assassination mission. Before he could carry out his purpose, he was killed however he was regenerated by Sheba Kinsel. Sheba is an inter-dimensional being belonging to a superior race of beings known as the Arakins. Sheba, possessing a great love for Darius, has chosen him to be her mate in the trackless realms of eternity upon his death.

His father General O'Keefe was a product of the Eugenics War. He was a genetically engineered man with superior intellectual capabilities and a desire to achieve power. This desire for power at the cost of bloodshed was passed onto his son, Darius. Clack's mother was a full bloodied Klingon female who suffered from a genetic mutated virus. Darius Shalmar had a daughter named Kesi (meaning born of a troubled father) who was the light of his life. Her location at this time is not known along with the location of his wife Teleia. The cloning process caused Darius to retain experiences from his previous life as General O'Keefe's son and Military General.

Darius Shalmar lives within Clack and is constantly struggling to emerge fully and return to a position of glory brought on through death and destruction. Darius Clack will live until age 37 due to flaws in the cloning process. At the time of the decommission of the USS Ursa Major, Clack's genetic structure had already begun the process that will lead to massive cellular degeneration.

The painting below was discovered in a private collection five years shortly after the attack on Camp Cameron. It is believed to be that of Darius Shalmar (all photos were mysteriously destroyed). It has since been placed in the Hall of Records adjacent to the Federation Council Chamber in honor of the political career of Shalmar. The decision was met with opposition due in part to political corruption allegations and a unwillingness to release detailed inform about Shalmar and O'Keefe's past. The artist is unknown at this point in time. 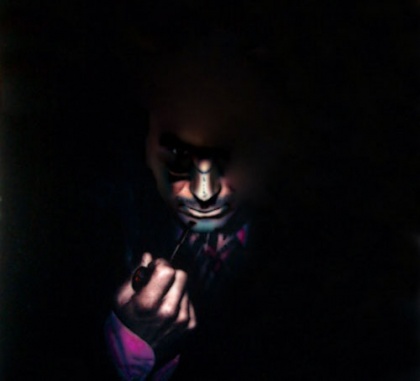 Darius Shalmar rose to power under his father, Representative General Miles O'Keefe during the height of the Dominion War. O'Keefe was even a leading candidate, at one point, to one day assume the office of the Presidency of the Federation. Much of their detailed past was sealed "Top Secret" by StarFleet Intelligence. It is assumed that the contents will one day be revealed.

Jackson Shalmar - half brother to Darius Shalmar. Currently living under the alias of Jack Ross on the Wheeler Colony.

The original man, Darius Shalmar, is married to Teleia Shalmar. The two had a daughter named Kesi. Darius Clack (clone) of Shalmar is married to Katherine Sharkey as a result of an accident. The marriage will be nullified in two years since it has never been consummated.

Kesi Shalmar - Born to parents Darius and Teleia Shalmar (Stardate 235912.10) Her Location is unknown at this time.

Darius Clack has no children.

Kesi Ross (clone of Kesi Shalmar) - Currently being raised by Jack and Elizabeth Ross of the Wheeler Colony.

The full details can be read here.

Darius graduated from the academy with the highest marks ever recorded in the area of engineering. On 238411.01, Clack was assigned to the USS URSA MAJOR as engineer. Immediately after arriving to the ship, Darius became the center of various strange unexplained events that took place throughout the ship. Despite drawing the suspicious eye of the chief of security, Lieutenant Cmdr Vincenzo D'Onofrio, Darius Clack performed well in the performance of his duty.

During a covert mission to Bungh Kho to retrieve a Face Dancer from the hands of a local Cartel, Darius was critically wounded after being attack by two men. Despite the physical damage he took, Clack killed his two attackers and was able to finish the mission. Once he returned to the ship, Darius was forced to undergo emergency surgery. It was after surgery, that he was joined by Sheba in spirit.

During this time, Sheba's sister Iboni physically joined her sister on the Ursa Major. Iboni caused damage to the ship by impersonating Darius Clack in engineering and revealing herself to security. She was immediately retrieved by her father and the two parted for parts unknown. The episode left Clack receiving all the blame for the incident and as a result he was placed under arrest in sickbay and detained for two months. Darius was left bitter and defeated by the entire episode. Sheba left him shortly afterwards. However, he still feels her presence all the time.

Shortly afterwards, he assisted in the retrieval of three Federation ships that accidental fell through a wormhole. After that, he was placed in charge of constructing a new power plant for the Wheeler Colony. During construction, his relationship with the workers of Wheeler resulted in several death threats and a plot to frame him by several workers who deliberately released radiation into the area killing several farmers.

The Ursa Major was decommissioned and on Stardate 238505.04, Darius Clack was assigned to the position of Chief Science Officer under the command of Captain Sidney Riley. He has remained at that position to this day.