The Nowak's six Type 8 shuttlecraft are the Armbruster, the Gruen, the Arooth, the T'Strella, the Galt and the Putanna (named after famous Federation diplomats). 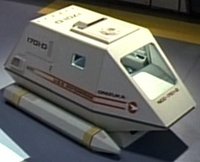 The normal flight crew is two pilots, although the shuttlepod can easily be operated by a single being. The ship also has a small cargo space, which can be used for carrying supplies. The cargo area was loaded and accessed through a hatch in the back of the craft. The type-15 is not normally outfitted to carry passengers, but a bench can be installed in the cargo area for a single crewperson. In this configuration, the cargo hatch serves as an emergency egress point, which can be blown away by explosive charges.

Nowak's three Type-15 shuttlepods are the Rejji, the St. James and the Ixiter (named after famous Federation diplomats).