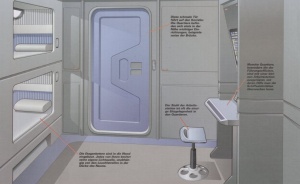 Standard Living Quarters are provided for both Starfleet Non-Commissioned Officers and Ensigns. These persons are expected to share their room with another crewmate due to space restrictions aboard the starship. After six months, crewmembers are permitted to bring family aboard the ship and a slightly larger room is allocated to them.

Two NCO's or two Ensigns are assigned to a suite. Accommodations include 2 bedrooms with standard beds, connected by a living/work area. A washroom with ultrasonic shower is located off of each bedroom. A food replicator and a personal holographic viewer are located in the living area. Small pets are allowed to NCO's.

Enlisted crewmembers share quarters with up to 4 others. Accommodations include 2 bedrooms with twin beds, connected by a living/work area. A washroom with ultrasonic shower is located off of each bedroom. A food replicator and a personal holographic viewer are located in the living area. Pets are not allowed to enlisted crew.

Crewmen can request that their living quarters be combined to create a single larger dwelling. 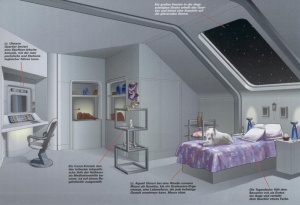 Starfleet personnel from the rank of Lieutenant Junior Grade up to Commander are given one set of quarters to themselves. In addition, department heads and their assistants are granted such privileges as well, in an effort to provide a private environment to perform off-duty work. After six months, officers are permitted to bring family aboard the ship and a slightly larger room is allocated to them. Members of the Captain's Senior Staff can have these restrictions waved with the Captain's permission.

These accommodations typically include a small bathroom, a bedroom (with standard bed), a living/work area, a food replicator, an ultrasonic shower, personal holographic viewer, and provisions for pets.

Officers may request that their living quarters be combined to form one large dwelling. 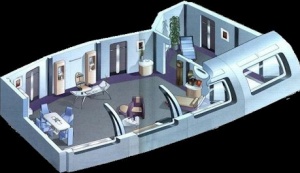 The Captain and Executive Officer of the vessel both have special quarters, located on Deck 5. They are located on a higher deck because these two people must be closer to the bridge in the event of an Alert situation.

These quarters are much more luxurious than any others on the ship, with the exception of the VIP/Diplomatic Guest quarters. Both the Executive Officer's and the Captain's quarters are larger than standard Officers Quarters, and this space generally has the following accommodations: a bedroom (with a nice, fluffy bed), living/work area, bathroom, food replicator, ultrasonic shower, old-fashioned water shower, personal holographic viewer, provisions for pets, and even a null-grav sleeping chamber. These quarters are similar in "comfort" to those of a high-ranking officer's quarters on a Galaxy class Starship.

The Nebula class is a symbol of UFP authority, a tool in dealing with other races. Starfleet intends to use Nebula class in diplomacy several times, and the need to transport or accommodate Very Important Persons, diplomats, or ambassadors may arise.

These quarters are located on Deck 7. These quarters include a bedroom, spacious living/work area, personal viewscreen, ultrasonic shower, bathtub/water shower, provisions for pets, food replicator, and a null-grav sleeping chamber. These quarters can be immediately converted to class H, K, L, N, and N2 environments.