From 118Wiki
< Choices (Victory)
Jump to navigation Jump to search 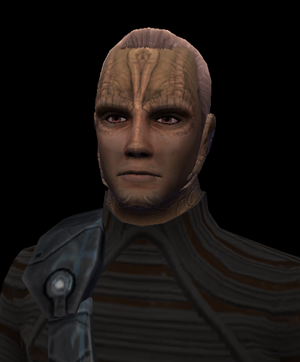 Legate Jarin is the head of foreign affairs and representative to the Detapa Council of Cardassia.

Legate Jarin was born on Cardassia Prime and had always aspired to get in to the politics. As soon as he was able, he joined the Cardassian Military and worked his way up the ranks to Gul as a special Envoy to the Tholians until the Incident of Pak Av. His actions in the Pak Av system earned him the title of Legate where he continued to keep himself in the midst of all political turmoil and missions.

He was one of the major speakers against the Cardassian Occupation of Bajor because he felt it was a waste of resources and men. The amount of trouble that the Bajorans caused was not worth the expense to be so close to Federation territory. He was able to convince enough leaders to insist of the withdrawal of forces from the planet. He equally protested the joining of Bajor to the Federation 25 years later.

In 2381, A cardassian Galor class ship crossed in to Tholian territory in a self assigned spy mission. The Tholians responded in force by taking Pak Av causing a rift in the signed treaty at the time. In the middle of the fighting, Gul Jarin ordered that he be beamed to the Tholian home ship unarmed only wearing a pressure suit to survive the high temperatures of the Tholian people. Commander Thrakus of the Tholian Assembly was so impressed with the bravado of the Cardassian that he willingly listened to the proposed cease fire. In a controversial decision that solidified the tholian/Cardassian border in the end, the offending Gul was turned over to the Tholians for his crimes.